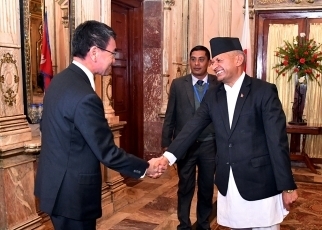 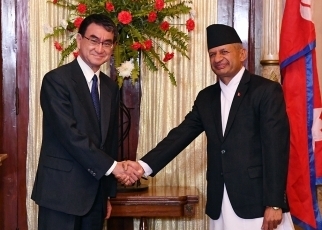 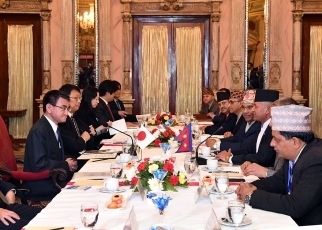 On January 9, from 6:25 p.m. for approximately 45 minutes until 7:10 p.m. (local time; from 9:40 p.m. until 10:25 p.m., Japan time) during his visit to the Federal Democratic Republic of Nepal, Mr. Taro Kono, Minister for Foreign Affairs, held a meeting with the Honorable Mr. Pradeep Kumar Gyawali, Minister for Foreign Affairs of the Federal Democratic Republic of Nepal. The overview of the meeting is as follows. After the meeting, a signing ceremony for an exchange of notes regarding the amendment to the schedule to the Air Services Agreement between the Government of Japan and the Government of the Kingdom of Nepal (the Japan-Nepal Air Services Agreement), and a signing ceremony for a Memorandum of Cooperation on conducting bilateral consultations were held, followed by a dinner hosted by Foreign Minister Gyawali and his wife.

In response, Minister Kono stated that he was happy to visit Nepal and meet again so soon after Minister Gyawali's visit to Japan in November last year. Minister Kono noted that his visit to Nepal was the first by a Minister for Foreign Affairs of Japan in approximately seven years, and conveyed his intention to support the economic development of Nepal.

[Reference] Signing ceremony for the exchange of notes regarding the amendment to the schedule to the Japan-Nepal Air Services Agreement.
Consultations took place between the two countries' aviation authorities based on a request from the Nepalese-side asking for the interests of airlines designated by the Nepalese-side to be expanded (including through Narita routes). As a result of those consultations the two sides agreed to amend the schedule to the Japan-Nepal Air Services Agreement, and so those details have now been confirmed through this exchange of diplomatic notes. This amendment to the schedule will relax the restrictions under the agreement with regard to the route destinations that the designated airlines of both countries can operate air services on.

Page Top
Back to Japan-Nepal Relations