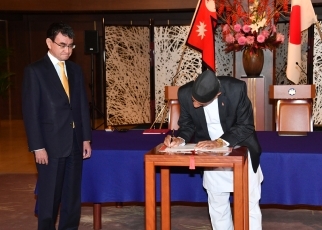 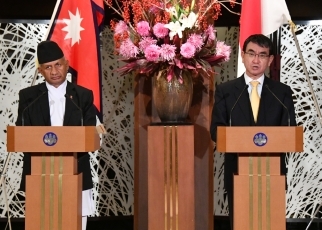 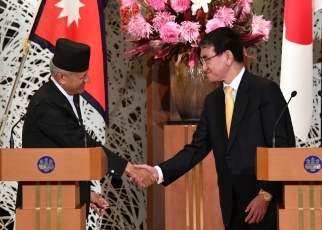 1. Beginning
Minister Kono said that Japan and Nepal had maintained traditionally friendly relations since the establishment of diplomatic relations in 1956 and he wanted to further develop the relations on the occasion of Minister Gyawali's visit to Japan. In addition, Minister Kono welcomed the election which had been conducted in Nepal based on the new Constitution established in 2015 and the peace and democratization process which was progressing steadily. He further mentioned that Japan hoped to strengthen the relationship with Prime Minister Ori's new administration and conveyed Japan’s intention to continue to support the economic development of Nepal.
In response, Minister Gyawali expressed his gratitude for the invitation to Japan and warm hospitality, and said that he wanted to open up a new chapter of the relationship between Japan and Nepal by strengthening cooperation in a wide range of fields through his visit as Minister for Foreign Affairs. In addition, Minister Gyawali stated that Nepal will enjoy steady development under the new Constitution, and that he wanted to realize high-level exchanges.

(1) Minister Kono highlighted Japan’s long-standing assistance for the consolidation of democracy in Nepal through improvement of legal systems and human resource development. He further expressed Japan’s continuing willingness to support Nepal's efforts considering Nepal’s vision "Prosperous Nepal, Happy Nepali” and its efforts towards transitioning to middle-income countries. Minister Kono expressed his hopes that Japan's economic cooperation would contribute to nation-building of Nepal and broaden the basis of Japan and Nepal friendly relations.
Furthermore, Minister Kono further hoped to strengthen people-to-people exchanges through the inauguration of direct flight between Japan and Nepal. In this regard, Japan is promoting youth exchange through JENESYS and will invite 24 youth in the field of agriculture and health.

(2) In response, Minister Gyawali deeply appreciated the support from Japan to date and underlined the importance that Nepal attaches to the fields of agriculture, hydroelectric power generation, tourism, infrastructure development, and human resource development. He further underlined the importance of Japan's continuous support for Nepal to become a middle income country, and expressed his hopes to attract further investment from Japan including through JETRO seminar. Minister Gyawali also hoped to expand people to people exchanges, including the increase of tourists by direct flights and promotion of exchanges in sports fields.

(3) Regarding infrastructure development, Minister Kono pointed out the importance of international standards, and Minister Gyawali mentioned the necessity to prioritize and carefully consider the projects.

3. Regional issues
Both Ministers exchanged views on the regional situation including North Korea. With regard to the North Korea situation, the two ministers shared views that it was indispensable to fully implement the relevant United Nations Security Council Resolutions(UNSCRs) toward the denuclearization of the Korean Peninsula.