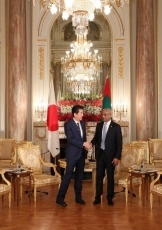 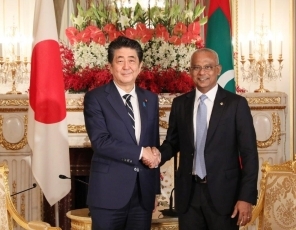 On October 21, from at 9:24a.m. for approximately 15 minutes, Mr. Shinzo Abe, Prime Minister of Japan held a Japan-Maldives Summit Meeting with H.E. Ibrahim Mohamed Solih, President of the Republic of Maldives on occasion of his visit to Japan. The overview of the meeting is as follows. (Mr. Akihiro Nishimura, Deputy Chief Cabinet Secretary and others attended from Japan side, H.E. Mr. Abdulla Shahid, Foreign Minister of the Maldives, and others attended from the Maldives side.)

1. Prime Minister Abe welcomed President Solih’s first visit to Japan and stated that the Maldives, located in the strategic point of Indian Ocean, is an important partner for Japan and Japan intends to strengthen the collaboration with the Maldives in coordination with the U.S. and India. In response, President Solih expressed his condolence to the affected people by the typhoon No.19 (Hagibis) and stated that he was honored to attend the historic Ceremony of the Enthronement and that the Maldives would like to strengthen the cooperation with Japan.

2. Prime Minister Abe stated that Japan continues to support Solih administration through expanding cooperation with the Maldives in areas such as security and economy and he also mentioned defense exchanges, dispatch of a macroeconomic and fiscal policy advisor and Japanese assistance such as provision of anti-terrorism equipment. In response, President Solih expressed appreciation for assistance in areas of security and economy and he mentioned Japanese contribution in human resource development by Japan Overseas Cooperation Volunteers (JOCV). He also expressed appreciation for Odawara city, which is Maldives’ Host Town for the Tokyo Olympics and Paralympic 2020 and expressed expectation that tourists and investment from Japan would be further boosted.

3. President Solih mentioned the importance of freedom of navigation in Indo-Pacific, and both sides exchanged views on situation in the East Asia. In addition, Prime Minister Abe sought understanding and cooperation on the early resolution of the abductions issue.

Page Top
Back to Japan-Maldives Relations