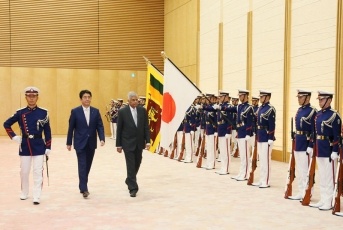 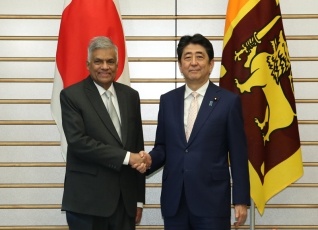 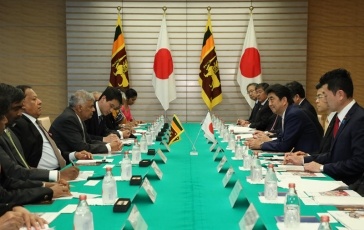 On April 12, from 4:10 p.m. for approximately 45 minutes, Mr. Shinzo Abe, Prime Minister of Japan, held a summit meeting with Hon. Mr. Ranil Wickremesinghe，Prime Minister of the Democratic Socialist Republic of Sri Lanka, during his Official Working Visit to Japan.

After the meeting, the two leaders issued a Joint Statement entitled “Deeping and Expansion of the Comprehensive Partnership between Japan and Sri Lanka.” (English (PDF)

) In addition, the notes concerning the two yen loan projects of “Rural Infrastructure Development Project in Emerging Regions” (12.957 billion yen), and “Kalu Ganga Water Supply Expansion Project (I)” (31.81 billion yen), as well as the grant aid project of “Economic and Social Development Programme” (1 billion yen) were signed and exchanged in the presence of the two leaders.
The outlines of the meeting are as follows:

Prime Minister Abe welcomed Prime Minister Wickremesinghe’s ninth visit to Japan, and stated that Japan wished to secure a free and open maritime order in the Indo-Pacific region and support stability and prosperity in the entire region. Prime Minister Abe attached, in this regard, utmost importance to its relationship with Sri Lanka situated in a strategic point on the sea lanes.

Prime Minister Wickremesinghe responded that it was important to ensure stability in the region in both eastern and western sides of the Indian Ocean, and that cooperation with Japan which shares this vision, was critically important for Sri Lanka’s further development in a free and open Indo-Pacific region, and that he visited Japan to strengthen their Comprehensive Partnership.

Prime Minister Abe stated that: (1)Japan would like to further expand its maritime cooperation with Sri Lanka; (2)Japan would strengthen Sri Lanka’s maritime safety capabilities by providing two patrol vessels and other supports, and advance defense exchanges and dialogue through the Japan-Sri Lanka Defense Dialogue to be newly established; and (3)Japan looked for Sri Lanka’s participation as an observer in the next Japan-India joint exercise between coast guards.

Prime Minister Wickremesinghe responded that: (1)He endorsed Japan’s Free and Open Indo-Pacific Strategy; (2) Maritime safety capabilities was an urgent issue for Sri Lanka’s development as a hub; and (3) He wished to realise concrete cooperation between maritime safety authorities as well as defense authorities.

On this basis, the both leaders reaffirmed the importance of open, transparent and commercial use of port facilities under full Sri Lankan Government control in developing ports for the stable development of Sri Lanka.

Prime Minister Abe stated that: (1) Japan would fully support Sri Lanka’s development as a hub in the Indian Ocean; (2)Japan would promote the development of infrastructure in sectors such as ports, transportation and energy through Japan’s Quality Infrastructure, and support strengthening connectivity and national development; (3)From this perspective, Japan decided to extend two yen loans totaling approximately 45 billion yen for the expansion of water supply and basic infrastructure development in the former conflict-affected areas as well as grant aid of one billion yen for the enhancement of Trincomalee Port.

In response, Prime Minister Wickremesinghe stated that: (1)Sri Lanka hoped to advance cooperation with Japan under the Comprehensive Partnership, since the Quality Infrastructure (PDF)

, the principle that Japan presented at the G7 Iseshima-Summit contributes to sustainable development in Sri Lanka; (2)Sri Lanka particularly looked forward to Japan’s cooperation for the development of infrastructure, including ports, as well as Japan’s engagement in the development of Trincomalee port and Colombo port; and (3)The Prime Minister further hoped for private investment from Japan to achieve balanced economic development of Sri Lanka.

5. Regional Situation, Cooperation in the International Arena, and Other Issues

The both leaders shared the view that the threat of North Korea’s nuclear and missile development has reached a new level, and that the two countries would cooperate to ensure the effectiveness of the United Nations Security Council Resolution.

Both leaders also shared the view on the importance of securing stability in the oceans, and particularly regarding the South China Sea, the importance of the freedom of navigation and overflight, self-restraint, demilitarisation, peaceful resolution of disputes in accordance with international laws including the United Nations Convention on the Law of the Sea.