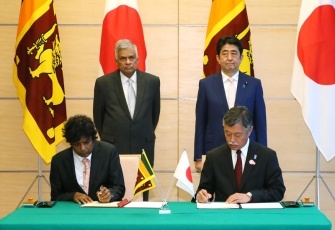 2. Overview of the Projects

(1) “Rural Infrastructure Development Project in Emerging Regions” (yen loan 12.957 billion yen)
This project is to improve basic infrastructure (local roads, small and medium-sized irrigation, and small-scale water supplies), directly connected to the lives and production activities of people in Sri Lanka’s Northern Province, Eastern Province, North Central Province and Uva Province, where development had been delayed due to the conflict and others.

This project is to construct new waterworks facilities and to reconstruct the water supply system for the Kalu Ganga river system in Kalutara District and Colombo District in the Western Province.

The terms of the two loans are as follows:

(3) “The Economic and Social Development Programme” (grant aid: 1 billion yen)
This project aims to realize safer and more efficient management in the Port of Trincomalee, which receives favorable terms as anchorage, by providing equipment relating to port facilities manufactured in Japan to the Sri Lanka Ports Authority.
As the Port of Trincomalee is located in the Eastern Province, it is expected that the project will contribute to the restoration of conflict-affected areas.