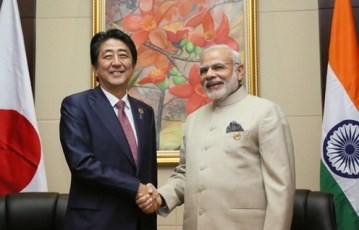 1. On September 7, commencing at 6:15 p.m. and lasting until 7:00 p.m., Mr. Shinzo Abe, Prime Minister of Japan, who was visiting Vientiane, the Lao People’s Democratic Republic to attend the Association of Southeast Asian Nations (ASEAN)-related Summit Meetings, held a summit meeting with H.E. Mr. Narendra Modi, Prime Minister of the Republic of India (the seventh meeting between the two leaders).

3. Following that, based on the recognition that cooperation between Japan and India would benefit not only the two countries but the world, and that in particular, cooperation between Japan’s technological prowess and India’s young workforce and market would make it possible to pursue cooperation on the world stage, the two prime ministers exchanged views on areas such as politics and security, economy and economic cooperation, including promoting the high-speed railway between Mumbai and Ahmedabad as well as human resources development, and promoting people-to-people exchanges.

4. Prime Minister Abe explained the “Free and Open India and Pacific Strategy,” and stated that India was the most important country in terms of linking Asia and Africa and that he hoped Japan and India would coordinate closely to make this concept a reality. In response, Prime Minister Modi stated that Prime Minister Abe’s vision was impressive and that he hoped to pursue cooperation between Japan and India that was aligned with his own ideas, which he had expressed at the G20.

5. The two leaders shared the view that having a discussion over the region’s various challenges among the leaders at the East Asia Summit (EAS) was important. With regard to the problems surrounding the South China Sea, the two leaders exchanged views on the importance of the rule of law and confirmed that they would strengthen the cooperative relationship in order to peacefully resolve disputes based on international law.

6. The two leaders once again expressed their condolences over the casualties of each country suffered in the terrorist attack in Dhaka, and Prime Minister Modi highly appreciated Prime Minister Abe’s policy of pursuing economic cooperation without yielding to terrorism. Prime Minister Abe stated that he intended to promote greater coordination, including on counterterrorism and ensuring the security of those who were engaged in international cooperation activities.