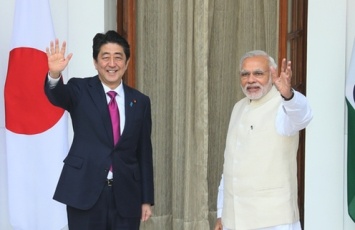 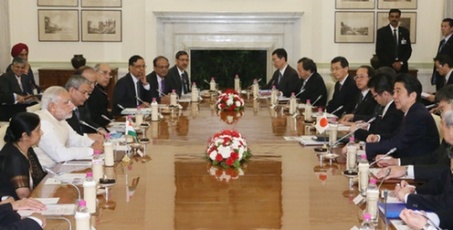 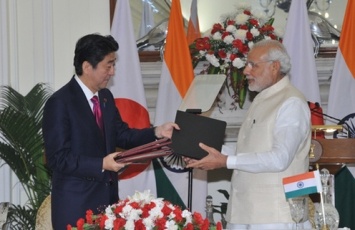 Photo: Cabinet Public Relations Office
Mr. Shinzo Abe, Prime Minister of Japan, held a Japan-India Summit Meeting in New Delhi with H.E. Mr. Narendra Modi, Prime Minister of the Republic of India on Saturday, December 12, from around 11:00 a.m. to around 12:00 p.m. The overview of the meeting is as follows. After the meeting, the two leaders signed the ''Japan and India Vision 2025 Special Strategic and Global Partnership: Working Together for Peace and Prosperity of the Indo-Pacific Region and the World, (Fact sheet (PDF)

) '' a joint statement that will serve as a guidepost for the ''new era in Japan-India relations.''

(1) Legislation for Peace and Security

Prime Minister Modi explained that maritime security is becoming a major challenge and he hopes Japan and India will reinforce maritime surveillance capacity and further promote information-sharing. With regard to the South China Sea, Prime Minister Modi explained that India is also concerned with the situation and major common agenda for India and Japan, as demonstrated by the strong messages at the G20 and ASEAN meetings, and he expected that the issue is peacefully resolved based on international law. Prime Minister Modi expressed his intention to continue inviting Japan to participate in the India-US joint naval exercise ''Malabar.''
Prime Minister Abe welcomed the signing of the Agreement concerning the Transfer of the Defense Equipment and Technology (PDF)

. Prime Minister Abe stated that Japan's regular participation in the Exercise ''Malabar'' is meaningful and he intends to strengthen cooperation with the ''JAI'' countries. (Note: The Japan, America and India acronym of ''JAI'' means victory in Hindi. This was proposed by Prime Minister Modi at a previous summit meeting). In response, Prime Minister Modi expressed his hope that Japan, India and the United States will move ahead with regional connectivity and humanitarian aid and disaster relief (HA/DR), as a part of ''JAI'' cooperation.

Prime Minister Modi stated that he is pleased that agreement has been reached on the Agreement for Cooperation in the Peaceful Uses of Nuclear Energy, and that it will also be a major business opportunity for Japanese companies. Prime Minister Abe replied that Japan appreciates that India is maintaining its commitment to a unilateral and voluntary moratorium on nuclear testing, and that he hopes to deepen cooperation in the field of disarmament and non-proliferation as nuclear energy cooperation between the two countries may advance in the future. Prime Minister Abe stated that Japan is proactively engaging in realizing ''a world without nuclear weapons'' and this goal is already shared with India. Prime Minister Abe explained that Japan attaches importance to the universalization of Treaty on the Non-Proliferation of Nuclear Weapons (NPT), the prompt entry into force of the Comprehensive Nuclear-Test-Ban Treaty (CTBT), and the prompt commencement of negotiations on the Fissile Material Cutoff Treaty (FMCT), and Japan also intends to continue dialogue on these issues.

Prime Minister Abe expressed his support for the reform initiatives that Prime Minister Modi is forwarding, and he noted Japan establish a 1.5 trillion yen financing facility for Japanese companies setting up businesses in India by Nippon Export and Investment Insurance (NEXI) and Japan Bank for International Cooperation (JBIC) for the purpose of expanding business opportunities for Japanese companies. Prime Minister Abe explained that approximately 400 billion yen of Official Development Assistance (ODA) is expected in this fiscal year and Japan is contributing to the development of quality infrastructure, and he requested that the Indian Government executes proper and predictable tax enforcement, as well as preparing a special policy package including the development of infrastructure in the vicinity of Japanese industrial complexes. Prime Minister Abe expressed his intention to cooperate on supporting strategic connectivity linking South Asia to Southeast Asia through the synergy between ''Act East'' policy and ''Partnership for Quality Infrastructure.''
Prime Minister Modi expressed his gratitude for Japan's support for India's reform and his intention to consider what can be done regarding the proposal for promoting business opportunities. Prime Minister Modi stated that India needs quality infrastructure based on his past experience as Chief Minister of Gujarat, and he expressed his expectation of high-level technology transfer from Japan, noting that this will be a major incentive for the Japanese and Indian business communities as well.

Prime Minister Abe stated that people-to-people exchanges are important for broadening the scope of the relationship between Japan and India, and that Japan aims to realize the target of having 10,000 Indian citizens visit Japan through student exchanges and short-term exchanges over the coming five years in order to contribute to ''Skill India.'' In response, Prime Minister Modi expressed his gratitude for this initiative which has a positive impact on young people overall.

Prime Minister Modi announced that multiple entry visa upon arrival in India (Visa on arrival) are scheduled to be issued to all Japanese citizens, including business-related travelers from March next year.