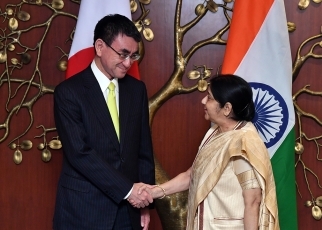 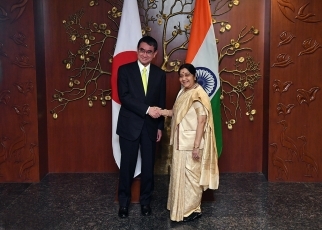 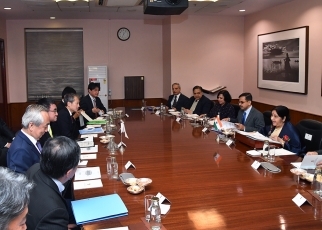 Minister Swaraj stated that she welcomed Minister Kono’s visit to India and was delighted to hold the 10th Japan-India Foreign Ministers’ Strategic Dialogue in Delhi. Minister Swaraj also mentioned that Prime Minister Modi’s visit to Japan in 2018 was a success with many achievements and that this meeting today is the start of Year 2019 to further develop India-Japan relations in various fields.

In response, Minister Kono stated that he was pleased to visit India for the first time as the Foreign Minister and that Prime Minister Modi’s visit to Japan in October last year showcased Japan-India special relations. He went on to say that for Japan, India is the most important partner to realize a “Free and Open Indo-Pacific” and together with India, Japan would like to play a leading role in promoting peace and prosperity in the region and the world.

(2) Security and Defence
Minister Kono stated that in order to further promote bilateral security and defence cooperation, Japan hopes for the earliest realization of a 2+2 Ministerial Meeting, which was confirmed during the last Summit Meeting, within this year and dialogues on space and cyber cooperation.
In response, Minister Swaraj expressed her hope to soon hold a 2+2 Ministerial Meeting as well as dialogues on space and cyber cooperation. She also mentioned the early commencement of negotiations on ACSA, Acquisition and Cross-Servicing Agreement.

(4) People to People exchange
Minister Kono welcomed the establishment of the India-Japan Friendship Forum, which is represented by leading experts and business leaders in India, and looked forward to further promotion and deepening of people-to-people and cultural exchanges between the two countries.

(5) Connectivity
Towards the realization of the shared vision of a free and open Indo-Pacific, Minister Kono reaffirmed the importance of cooperation in third countries and India’s North Eastern region. The two ministers shared the view to continue to crystalize cooperation especially through Act East Forum.

The two ministers exchanged their opinions on regional affairs including the North Korea issues as well as global challenges such as G20, UNSC, Disarmament and Non-Proliferation, and Regional Comprehensive Economic Partnership (RCEP).