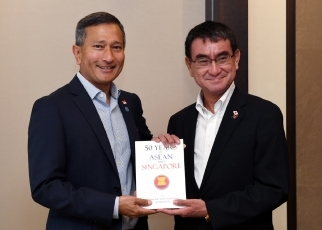 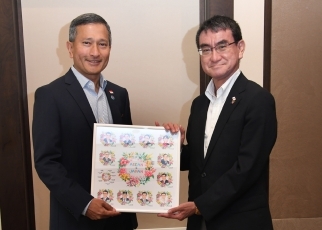 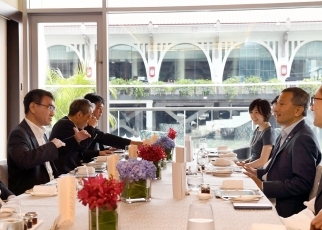 On August 5, commencing at 9:30 a.m. (local time) for approximately one hour and 40 minutes, Mr. Taro Kono, Minister for Foreign Affairs, who is visiting Singapore to attend Association of Southeast Asian Nations (ASEAN)-related Foreign Ministers’ Meetings, held a foreign ministers’ meeting (breakfast meeting) with H.E. Dr. Vivian Balakrishnan, Minister for Foreign Affairs of the Republic of Singapore. The overview of the meeting is as follows.

1. Minister Balakrishnan welcomed Minister Kono on this visit, and expressed his sympathies regarding the torrential rain disaster in western Japan. In response, Minister Kono thanked Minister Balakrishnan for his words, explained that H.E. Mr. Lee Hsien Loong, Prime Minister of Singapore, also sent a letter of sympathies and stated that the Government of Japan is making the utmost effort to restore the disaster-affected areas as quickly as possible.

2. Minister Kono expressed respect for Singapore’s leadership as the ASEAN Chair and for Singapore’s successful holding of the series of meetings, and stated that he hopes to enhance Japan’s relationship with Singapore and ASEAN. Minister Balakrishnan replied by thanking Japan for its support for ASEAN thus far, and by welcoming Japan’s continued contributions to ASEAN.

3. In addition, the two ministers exchanged views on the regional situation, including North Korea and the South China Sea, and on promoting free trade, including the Trans-Pacific Partnership (TPP) and the Regional Comprehensive Economic Partnership (RCEP).

4. Ahead of the meeting Minister Kono and Minister Balakrishnan exchanged gifts (Note).