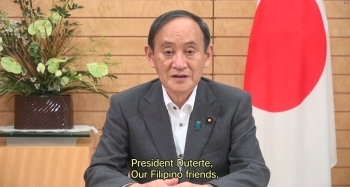 to celebrate this commemorative occasion.

The overview of Prime Minister Suga’s message is as follows:

[Prime Minister Suga’s Video Message]
It is my great pleasure to celebrate with President Duterte and the Filipino friends the 65th anniversary of the normalization of the diplomatic relations between Japan and the Philippines as well as the 10th anniversary of our Strategic Partnership.

Our strategic partnership is founded on shared universal values such as freedom, democracy, and the rule of law, and has entered its "golden age. "

In the fight against COVID-19, Japan and the Philippines work together and support each other to overcome this hardship.

On the infrastructure development front, Japan has been assisting the “Build, Build, Build” programme of the Philippines through public and private sector engagement. I am also delighted to announce that Japan has now fulfilled its 2017 commitment to public and private financing of one trillion yen (approx. 476 billion pesos) in five years .*

Both of our countries, being maritime nations, value the idea that a rules-based free and open maritime order brings peace and prosperity to the region. With a view to realizing a “free and open Indo-Pacific,” Japan will continue to advance cooperation in a proactive manner.

Japan, with years of engagement in peace-building in Mindanao, is committed to reinforcing its support in ways commensurate with the progress of the peace process.

I hope that this memorable year will gather momentum for further deepening relationship between our two countries.

*Fact Sheet: Japan’s Contribution of One Trillion Yen in Public & Private Finances to the Philippines’ Nation-Building（PDF）

[Reference]
On July 23, 1956, the San Francisco Peace Treaty and the Japan-Philippines Reparations Agreement between Japan and the Philippines entered into force, and the diplomatic relations between the two countries were normalized.