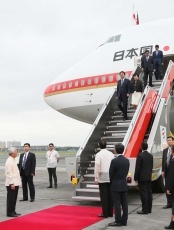 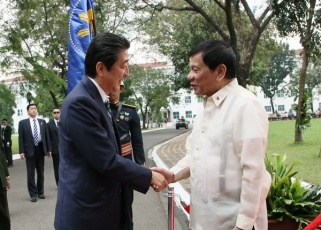 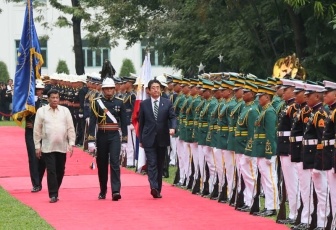 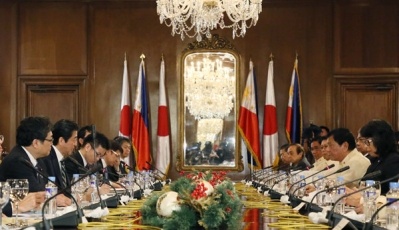 Photo: Cabinet Public Relations Office
On Thursday, January 12, commencing at 3:50 p.m. (local time) (4:50 p.m. JST) for approximately 40 minutes, Mr. Shinzo Abe, Prime Minister of Japan, held a Japan-Philippines summit meeting with H.E. Mr. Rodrigo R. Duterte, President of the Republic of the Philippines, at the Malacanang Palace in Manila, during his visit to the Philippines. The overview of the meeting is as follows. This meeting was also attended by Mr. Koichi Hagiuda, Deputy Chief Cabinet Secretary, Mr. Katsuyuki Kawai, Special Advisor to the Prime Minister, and others.

(2)In response, Prime Minister Abe commented that he is honored to be the first foreign head of state to visit President Duterte, and expressed his happiness at being able to meet again in Manila within a short timeframe since their meeting in Tokyo in October 2016 and the opportunity to visit Davao, the President's hometown, tomorrow. Prime Minister Abe also commented that his visit to the Philippines as his first destination in 2017 demonstrates that he places top priority on Japan-Philippines relations and voiced his full support for the success of the ASEAN-related Meetings and the East Asia Summit with President Duterte as the ASEAN chair.

(3)Furthermore, Prime Minister Abe commented that Japan will provide one trillion yen in assistance over the next five years, including ODA and private-sector investment, establish a Joint Committee on Economic Cooperation and Infrastructure to coordinate this assistance, steadily implement cooperation that engages the public and private sectors for state building, and dispatch experts to the National Economic and Development Authority.

Prime Minister Abe expressed interest in contributing to infrastructure development leveraging Japan's technology and know-how. Specifically, he mentioned the decision to assist a review of the transportation roadmap for metro Manila and formulation of a master plan for a national highway system, desire to prepare an action plan in the electric power field by March, interest in actively utilizing Japan's technology and know-how to support the early implementation of the Manila subway project, and current implementation of a survey that should be ready during March for a train service between Malolos and Clark as part of realizing the "Clark Green City Concept" by Japan Overseas Infrastructure Investment Corporation for Transport & Urban Development (JOIN).

Additionally, Prime Minister Abe noted that Japan will continue to contribute to peace and development in Mindanao, including by drawing on the discussions at the Joint Committee on Economic Cooperation and Infrastructure, that Japan decided to begin an assistance survey for urban development and flooding countermeasures in Davao, and that Japan will make a decision in the near future on an irrigation and road development survey in Bangsamoro and assistance for building a power transmission network and improving the health and educational environment.

Prime Minister Abe explained that Japan hopes to work together with the Philippines to jointly consider meaningful assistance measures to address the issue of illegal drugs. He noted that Japan intends to provide "all-Japan" cooperation, including utilization of private sector know-how, and aims to begin by inviting senior officials of related ministries to Japan from February, subsequently assist in developing treatment facilities, formulating treatment programs, and developing human resources and conducting promotional activities, and implement rehabilitation assistance through collaboration with the Colombo Plan.

In regard to security and terrorism countermeasures, Prime Minister Abe explained that Japan welcomes the conclusion of an exchange of notes for provision of compact speed boats and other equipment and intends to promptly make a decision on further provision of patrolling-related equipment.

Prime Minister Abe explained that Japan intends to assist in further enhancement of maritime capabilities, such as provision of patrol boats and cultivation of human resources, that Japan is providing pilot training in Maritime Self-Defense Force aircraft in Japan, that the Self-Defense Forces intends to participate in the US-Philippines Balikatan Exercises being held this year, and that Japan will promote defense cooperation in a variety of areas, including capacity building assistance, defense equipment cooperation, and training and exercises.

Additionally, Prime Minister Abe welcomed the signing of a memorandum on terrestrial digital broadcast systems and a bilateral document related to building a bilateral credit system.

(4)In response, President Duterte thanked Japan for its assistance to improve countermeasure capabilities in maritime security and counter-terrorism areas, particularly provision of patrol boats and compact speed boats and lending of TC-90 Maritime Self-Defense Force aircraft, and he spoke favorably about Japan's contributions to the development of Mindanao in agricultural and infrastructure areas, expressed interest in continued assistance, and expressed deep appreciation for Japan's assistance. Furthermore, President Duterte noted that while trade and investments from Japan were already vibrant, he hoped for further expansion of economic ties and expressed his intention to enhance the business environment.

(5)Prime Minister Abe commented that Japan hopes to actively cooperate on regional issues with the Philippines, the ASEAN chair, and noted the importance of strengthening ASEAN's unity and centrality and advancement as a free and open community and Japan's intention to assist the Philippines as much as possible from this perspective. Prime Minister Abe also explained that Japan wants to closely collaborate with the Philippines on the Regional Comprehensive Economic Partnership (RCEP) and to achieve an early conclusion of a high-quality agreement. He commented too that Japan will continue to pursue the entry into force of the TPP Agreement. Furthermore, Prime Minister Abe explained that he intends to strengthen defense cooperation with ASEAN and make all possible efforts towards development of a financial safety net.

(6)Regarding the South China Sea situation, Prime Minister Abe emphasized the importance of the rule of law and a peaceful solution to the conflict, taking into account the final award by the arbitral tribunal. On North Korea issues, he explained that Japan wants to collaborate with the Philippines on strict enforcement of related United Nations Security Council resolutions, including the new resolution, regarding North Korea's nuclear and missile developments and on the early resolution of the abductions issue. In response, President Duterte noted that the Philippines and Japan have developed a friendly relationship for 60 years and the Philippines hopes to continue to develop even stronger relations and support Japan in all areas.

2 Signing and exchange of notes ceremony, and joint press announcement

(1)Signing and exchange of notes ceremony

Representatives from the two countries signed items (a) and (b) and exchanged notes for items (c), (d), and (e) in the presence of the two leaders. 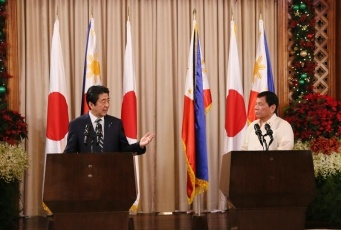 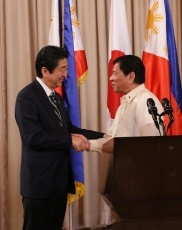 Photo: Cabinet Public Relations Office
The two leaders made a joint press announcement after the signing and exchange of notes ceremony.