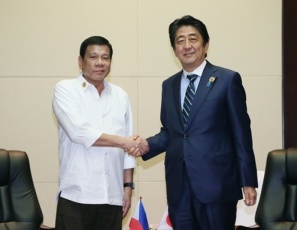 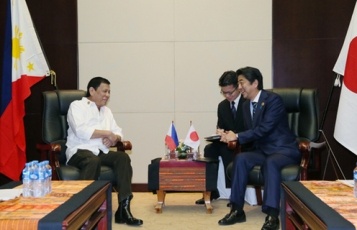 Photo: Cabinet Public Relations Office
On September 6, commencing at 11:58 a.m. (local time; 1:58 p.m. Japan time) for approximately 45 minutes, Mr. Shinzo Abe, Prime Minister of Japan, held a Summit Meeting with H.E. Mr. Rodrigo Roa Duterte, President of the Republic of the Philippines, in Vientiane, the Lao People's Democratic Republic, where both leaders attended the Association of Southeast Asian Nations (ASEAN)-related Summit Meetings. The overview is as follows. This was the first summit meeting between Japan and the Philippnes since President Duterte was appointed as a President on June 30. An exchange of views on various topics relating to the development of the Japan-Philippines relations took place in a congenial atmosphere.

Prime Minister Abe congratulated President Duterte on his appointment as President, firmly condemned the recent terrorist attack in Davao, and expressed his sincere condolences to the victims and their families. Prime Minister Abe stated that this year is a milestone year as the 60th anniversary of the normalization of the Japan-Philippines relations, and on the basis of the close partnership, he intends to further advance the cooperation between the two countries in a broad range of fields.

In response, President Duterte expressed his gratitude for the condolences extended by the Government of Japan and Japanese citizens over the recent terrorist attack in Davao, thanking Prime Minister Abe for the support that Japan has provided the Philippines thus far, and explained that in particular, the Japan International Cooperation Agency (JICA)'s presence is contributing to the development of the Philippines across the country, in various fields. President Duterte stated that he hopes the two countries will always be good partners, and intends to further deepen the cooperative relationship.

(1) Japan's cooperation with the Philippines

Prime Minister Abe stated that in light of the recent terrorist attack, Japan will offer its utmost support for the Philippines' counterterrorism measures, and also intends to cooperate on other important challenges, such as Mindanao's peace process and economic development. Prime Minister Abe explained that in Mindanao, Japan has implemented over 19 billion yen of support for former conflict-affected areas and over 76 billion yen of support for the island overall over the last 10 years.

Furthermore, Prime Minister Abe stated that Japan recently began to assist the formulation of Davao City's urban infrastructure development plan, and is committed to promptly work on  the Agribusiness Promotion Program for Mindanao once theproject, which Japan is currently examining carefully with the Government of the Philippines, is confirmed. Prime Minister Abe explained that Japan intends to actively utilize its knowledge in order to comprehensively support Mindanao on both the tangible and intangible fronts. Additionally, with regard to infrastructure support, Prime Minister Abe explained that a study on a subway system in Metro Manila is progressing steadily and that Japan also recently decided to assist the formulation of a development plan for Metro Cebu's traffic system. Prime Minister Abe stated that Japan will also advance the cooperation on infrastructure development such as Metro Manila's transportation and traffic systems, including the "North-South Commuter Railway Project" (Note), as well as regional development.

(2) Cooperation in the maritime security

With regard to the cooperation in the maritime security, the two leaders agreed on the transfer of the Maritime Self-Defense Forces (MSDF)'s TC-90 training aircraft.  Prime Minister Abe explained that Japan intends to continue enhancing security and defense cooperation in the future, including training the Philippine Navy pilots and enhancing the capacity of the infrastructure.
Additionally, Prime Minister Abe noted that the first of ten 40-meter patrol vessels had arrived in the Philippines and the remaining patrol vessels are also scheduled to arrive steadily, and explained that Japan has decided to provide two large-scale patrol vessels through a yen loan.

President Duterte responded by expressing his appreciation, and he explained that these patrol vessels will enable the Philippines to strengthen patrols in its coastal waters and will enhance the Philippines' presence in the seas.

Prime Minister Abe stated that he hopes President Duterte will visit Japan in the near future.

In connection with the issues surrounding the South China Sea, the two leaders exchanged views on such as the importance of the rule of law, and confirmed that they will strengthen the cooperative relationship to resolve the disputes peacefully, based on the award recently rendered in the arbitral tribunal between the Philippines and the People's Republic of China.

Prime Minister Abe explained that North Korea has launched approximately 20 missiles this year and that three of its ballistic missiles fell into Japan's exclusive economic zone (EEZ) on September 5 while the G20 Summit was being held. Prime Minister Abe expressed the view that such missile launches pose a grave threat to the security of Japan and the region, and stated that the international community should firmly respond to the series of provocative acts by North Korea and should increase pressure through the strict fulfillment of the United Nations Security Council (UNSC) resolutions and other measures. Additionally, Prime Minister Abe explained that it will be important for the ASEAN to issue a unified message on resolving the abduction issues, and that he hopes for understanding and cooperation.

In response, President Duterte stated that the Philippines supports Japan's position on the problems on the Korean Peninsula, and intends to further deepen the relationship of cooperation.

A yen loan (amounting to approximately 242 billion yen) project for newly preparing (laying railway tracks, procuring carriages, etc.) a section of approximately 38 kilometers from Malolos City in Bulacan Province in the north to Tutuban in the Metro Manila, which forms part of the ''North-South Railway Project'' that will link suburbs on the North-South axis of Metro Manila with the metropolitan area. The project aims to strengthen the transport network and ease serious traffic congestion in Metro Manila, and contribute to sustainable development, overcoming vulnerability, and a stable life and production base, through the promotion of investments. A signing of an exchange of notes between the governments of Japan and the Philippines was held in November 2015.