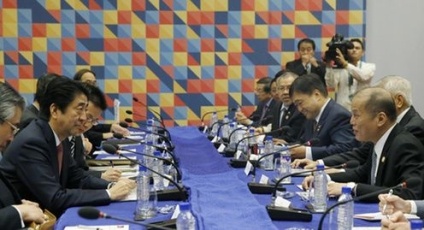 Photo: Cabinet Public Relations Office
On Thursday, November 19, commencing at 8:15 p.m. (local time) for approximately 40 minutes, Mr. Shinzo Abe, Prime Minister of Japan, held a meeting with H.E. Mr. Benigno S. Aquino III, President of the Republic of the Philippines, in Manila, the Philippines, during his visit to attend the 23rd Asia-Pacific Economic Cooperation (APEC) Economic Leaders' Meeting. The overview of the meeting is as follows.
Incidentally, after the meeting, exchanges of notes for the yen loan ''North-South Commuter Railway Project'' (Note 1) and the ''Japan-Philippines Social Security Agreement'' (Note 2) were signed in the presence of the two leaders.

Prime Minister Abe stated that he is grateful that the Philippine government welcomed t ''Legislation for Peace and Security,'' which was enacted recently, and explained that Japan continues to promote the efforts of ''Proactive Contribution to Peace'' and hopes to further contribute to the peace and stability of the region and international community. Furthermore, he welcomed the agreement in principle reached on the agreement concerning the transfer of defense equipment and technology, which the two sides decided to initiate negotiations in June this year, and explained that he will aim for a prompt signing, as well as accelerate considerations for the realization of equipment cooperation in the maritime security. He also explained that Japan will assist the further enhancement of the capacity of the Philippine Coast Guard (PCG), and will proactively consider the provision of large-scale patrol vessels that was requested by the Government of the Philippines.
President Aquino expressed his respect for Prime Minister Abe's leadership regarding the ''Legislation for Peace and Security,'' along with expressing his expectation of further contributions by Japan to global peace and stability. Regarding the agrrement concerning transfer of defense equipment and technology, he stated that he hopes to move ahead with cooperation toward reaching on an agreement.

Prime Minister Abe welcomed progress of the ''Cooperation Roadmap for Quality Infrastructure Development in the Transport Sector in Metropolitan Manila Area,'' which was agreed upon in June this year, and stated that he hopes to begin a comprehensive study on realizing a subway system project following the ''North-South Commuter Railway Project'' (Note 1), in which the two sides were scheduled to sign an exchange of notes after the meeting. He also welcomed the ''Japan-Philippines Social Security Agreement'' (Note 2), which the two sides were scheduled to sign after the meeting, as an agreement that will contribute to the further promotion of economic exchanges.
In response, President Aquino expressed his gratitude for Japan's support for infrastructure development in the Philippines, voiced his expectation of further investment from Japan, and stated that he hopes the ''Japan-Philippines Social Security Agreement'' will enter into force in an early time.
The two sides shared the view that they will mutually endeavor to prepare a structure in both countries within this year for accepting human resources conducting housekeeping services support from the Philippines in Special Economic Zones, in order to begin the program promptly.
In addition, President Aquino expressed the Philippines' interest in joining the Trans-Pacific Partnership (TPP), and Prime Minister Abe welcomed the Philippines' expression of interest. The two sides agreed that they will move ahead with the preparation on a general review of the Japan-Philippines Economic Partnership Agreement.

Prime Minister Abe voiced Japan's ongoing support for achieving enduring peace in Mindanao, and announced the decision to support the yen loan ''Harnessing Agribusiness Opportunities through Robust and Vibrant Entrepreneurship Supportive of Peaceful Transformation (HARVEST)'' (Note 3), which amounts to approximately 15 billion yen, that will serve to the economic autonomy in the Bangsamoro Area. President Aquino reiterated his gratitude for Japan's support for the Mindanao Peace Process.

President Aquino explained that the Philippines is engaging in the Philippines-China arbitration procedure on the South China Sea from the standpoint of promoting the rule of law, and expressed thanks for Japan's support. In response, Prime Minister Abe stated that unilateral actions that change the status quo and heighten tensions, such as large-scale land reclamation and the building of outposts in the South China Sea, are a cause of common concern to the international community, and the international community's coordination is important to preserve open, free and peaceful seas. Furthermore, in regard to the Philippines-China arbitration procedure, which is moving to a new stage, Prime Minister Abe explained that Japan continues to support the peaceful settlement of disputes under international law. President Aquino explained the recent situation regarding Philippines-China relations in the South China Sea.

(Note 1) Yen Loan ''North-South Commuter Railway Project''
A yen loan (amounting to approximately 242 billion yen) project for newly preparing (laying railway tracks, procuring carriages, etc.) a section of approximately 38 kilometers from Malolos City in Bulacan Province in the north to Tutuban in the Metro Manila, which forms part of the ''North-South Railway Project'' that will link suburbs on the North-South axis of Metro Manila with the metropolitan area. The project aims to strengthen the transport network and ease serious traffic congestion in Metro Manila, and contribute to sustainable development, overcoming  vulnerability, and a stable life and production base, through the promotion of investments.

(Note 2) ''Japan-Philippines Social Security Agreement''
Employees sent from Japan to the Philippines as well as those sent from the Philippines to Japan are currently subject to compulsory coverage under the social security systems of both countries. Under this Agreement, those employees temporarily dispatched for a period of five years or less to the other country will be, in principle, covered only by the pension system of the country from which the employees are dispatched. The Agreement will also enable the establishment of eligibility to receive a pension in each country by totaling the periods of the coverage in both countries. Following two rounds of negotiations between the Governments of Japan and the Philippines on this Agreement, a substantial agreement was reached in August this year.

(Note 3) Yen Loan ''Harnessing Agribusiness Opportunities through Robust and Vibrant Entrepreneurship Supportive of Peaceful Transformation (HARVEST)''
Funding for capital investment, operating capital, etc. (amounting to approximately 14.8 billion yen) will be provided to private-sector companies and agricultural cooperatives in conflict-affected areas in Mindanao and neighboring areas. Through the improvement of the access to finance in the region and vitalization of economic activities, the loan will promote activities that can serve for job creation and livelihood improvement, and will encourage the development and establishment of peace in Mindanao.