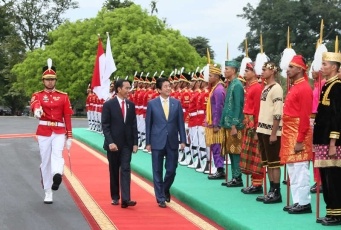 On January 15, commencing at 4:30 p.m. (6:30 p.m. Japan time) for approximately 1 hour and 40 minutes, Mr. Shinzo Abe, Prime Minister of Japan, held a Japan-Indonesia Summit Meeting with H.E. Mr. Joko Widodo, President of the Republic of Indonesia, at Bogor Palace, during his visit to Indonesia. The overview of the meeting is as follows. Mr. Koichi Hagiuda, Deputy Chief Cabinet Secretary; Mr. Hiroto Izumi, Special Advisor to the Prime Minister; and Mr. Eiichi Hasegawa, Special Advisor to the Prime Minister; and others attended from the Japanese side. H.E. Mr. Luhut Binsar Pandjaitan, Coordinating Minister for Maritime Affairs of the Republic of Indonesia; H.E. Ms. Retno L. P. Marsudi, Minister for Foreign Affairs of the Republic of Indonesia; and others attended from the Indonesian side. For the first 40 minutes of the Summit Meeting a small group meeting was held.

(1) Prime Minister Abe explained the Free and Open Indo-Pacific Strategy and Japan’s hope for an active role by Indonesia with its position as a hub between the two oceans, the Indian Ocean and the Pacific Ocean. In response, President Joko expressed interest in collaboration with the Indian Ocean Rim Association (IORA), which Indonesia chairs, and participation from Japan at the IORA Leaders’ Summit scheduled for March.

(2) The two leaders agreed on the importance of cooperation between Japan and Indonesia, and between Japan and ASEAN for maintaining a peaceful and stable Asia amid the recent increasingly uncertain international circumstance. Additionally, Prime Minister Abe indicated that Japan intends to continue to support ASEAN’s unity and centrality.

(3) Regarding the South China Sea issue, the two leaders reaffirmed the importance of the rule of law and peaceful resolution of conflicts.

(5) The two leaders confirmed that Japan and Indonesia should work together closely with the relevant countries to maintain free and open economies. 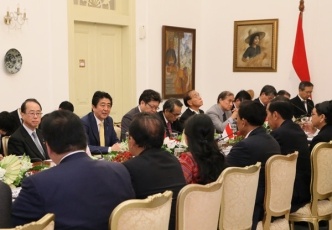 The expanded meeting took place for about one hour, commencing at 5:15 p.m., after the small group meeting.

(2) In response, Prime Minister Abe explained that he is pleased to visit Indonesia again, that he appreciates and feels very honored by the welcome from President Joko at Bogor Palace with its lush greenery, and that he hopes to work together with President Joko to deepen cooperation in a variety of areas in order to further strengthen the strategic partnership between the two countries.

Additionally, Prime Minister Abe commented that Japan is putting particular emphasis on cooperation in maritime fields and hopes to advance cooperation in the fisheries fields for remote islands and in strengthening Indonesia’s maritime safety agency. Furthermore, Prime Minister Abe expressed his intention to deepen security-related cooperation utilizing the framework of the Japan-Indonesia Foreign and Defense Ministerial Meeting (2 + 2), the only such forum Japan has with an ASEAN country, and other frameworks. Prime Minister Abe also explained that Japan is preparing a grass-roots project to realize a society that gives hopes to Asia’s youth as a way of addressing the fundamental causes of terrorism. In addition, Prime Minister Abe stated that design work for construction of Patimban Port has started and it is important to consign operation of the port to a joint venture company between the two countries. Moreover, the Prime Minister explained that Japan hopes to assist in the project to accelerate the operating speed of the northern Java railway using Japanese technology and knowhow, that Japan is ready to continue cooperation utilizing Japanese technologies for the Jakarta Mass Rapid Transit (MRT) too, and that Japan wants to contribute with public and private efforts to the 35GW power source development program. Prime Minister Abe also noted that Japan places emphasis on narrowing the gap through regional development and intends to create business opportunities totaling about 74 billion yen for three irrigation and coastal protection projects.

(3) In response, President Joko commented that Indonesia understands the importance of the Japan-Indonesia Foreign and Defense Ministerial Meeting (2 + 2) in dealing with the environment facing the two countries and expressed his intention to continue it. Furthermore, President Joko stated that Indonesia hopes to proceed with maritime cooperation mainly to foster human resources and build infrastructure to advance maritime industries, that it also wants to build up industry for the development of outlying islands, and that it welcomes the establishment of Japan-Indonesia Maritime Forum. President Joko also explained that Indonesia wants to mobilize the entire country in the areas of counter-terrorism measures and cyber security. Additionally, President Joko welcomed the recent increase in investments between the two countries, expressed his intention to make efforts to improve the investment environment to promote investments from many Japanese companies, and explained his aim to develop the new Patimban Port through cooperation with Japan and to establish a joint venture between Japan and Indonesia as the operator. Regarding the project to increase the speed of the railway between Jakarta and Surabaya, President Joko stated that he is looking forward to a proposal from Japan. President Joko also expressed his appreciation for Japan’s provision of yen loans for irrigation and coastal protection projects.

(4) Furthermore, Prime Minister Abe noted that business leaders joined him on this visit and that he hopes their comments can provide valuable insight for improving the investment environment in Indonesia.