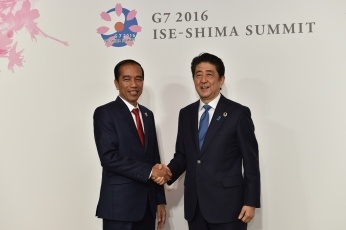 On May 27, commencing at around 11:20 a.m. for approximately 10 minutes, Mr. Shinzo Abe, Prime Minister of Japan, had a conversation with H.E. Mr. Joko Widodo, President of the Republic of Indonesia, who is visiting Japan to attend the Outreach Meeting of the G7 Ise-Shima Summit. The overview of the conversation is as follows. The conversation was attended on the Japanese side by Mr. Koichi Hagiuda, Deputy Chief Cabinet Secretary, Mr. Hiroshige Seko, Deputy Chief Cabinet Secretary and others; and on the Indonesian-side by Ms. Retno Marsudi, Minister of Foreign Affairs of the Republic of Indonesia and others.

1. Prime Minister Abe welcomed President Joko to Japan, and explained that in light of Indonesia’s position as a major power of ASEAN, President Joko’s attendance was meaningful in terms of discussing Asia’s development together with the G7. Prime Minister Abe stated that maintaining ASEAN unity on the South China Sea issue is important and expressed his expectation in President Joko’s leadership. The Prime Minister explained that he is confident the Patimban new port development project in Eastern Jakarta will be a symbolic project for the two countries, that Japan is prepared to extend its utmost cooperation by utilizing yen loans and Japanese technologies, and that he hopes to secure the participation of Japanese companies in managing the new port. Prime Minister Abe also explained that Japan would continue to contribute to Indonesia’s development through the development of quality infrastructure, and stated that he hopes to deepen discussions on cooperation in the electricity and transportation fields in the future also.

2. In response, President Joko explained that he had signed a presidential decree on the new Patimban port two days ago, that Indonesia hopes to utilize Japanese official development assistance (ODA), and that it also intends to undertake the operation of the new port in cooperation with Japan. President Joko said that Indonesia also hopes to obtain Japan’s cooperation on a coal-fired thermal power plant in central Java, and explained that considerations on a northern Java railway line were currently underway in Indonesia, and that Indonesia intended to consult the Japanese side in due course.