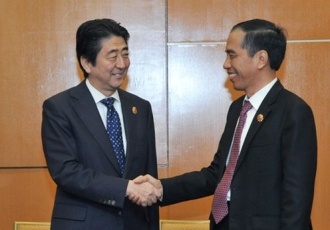 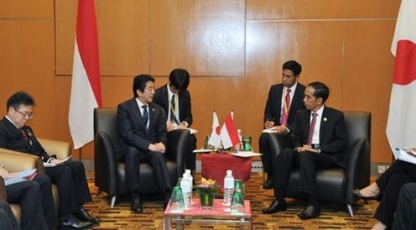 Photo: Cabinet Public Relations Office
On Sunday, November 22, commencing at around 10:10 a.m. (local time) for approximately 30 minutes, Mr. Shinzo Abe, Prime Minister of Japan, held a meeting with H. E. Mr. Joko Widodo, President of the Republic of Indonesia, during his visit to Kuala Lumpur, Malaysia to attend an ASEAN-related Summit Meeting. The overview of the meeting is as follows.

At the beginning, President Joko stated that this was the first Summit Meeting since he met Prime Minister Abe in April, that he saw the Prime Minister last week in Turkey, and that Indonesia is strongly committed to strengthening cooperation with Japan. President Joko also expressed his appreciation for the visit to Jakarta by a delegation of approximately a thousand VIPs, businessmen, and others led by Mr. Toshihiro Nikai, chairman of the Japan-Indonesia Parliamentarians' League. In response to this, Prime Minister Abe expressed his delight at meeting President Joko for their first Summit Meeting since last April. The Prime Minister stated that the two countries are strategic partners with a long friendly relationship, that Indonesia's development is important for the prosperity of the region, and that Japan intends to cooperate on the development of high quality infrastructure, including transportation, ports, and electric power. The Prime Minister also conveyed his gratitude for the reception of the approximately thousand-member delegation led by Chairman Nikai.

President Joko expressed his expectations regarding the start of construction of a new port which is to the east of the capital city region at an early date and his hope for Japanese cooperation. Prime Minister Abe expressed his belief that Japan made the best feasible proposal for a high-speed railway system and frankly stated his disappointment at the result, but he also expressed intention to cooperate in the development of high quality infrastructure nevertheless. The Prime Minister also stated that the new port near the capital city region is important in terms of improving the efficiency of marine distribution costs and for expansion of investment, and expressed his desire for the two countries to cooperate with a view to attracting private investment. Additionally, Prime Minister Abe stated that investment in Indonesia is strong but also expressed his wish for the quick resolution of outstanding issues. Furthermore, the Prime Minister stated that a relationship of mutual trust, procedural transparency, feasibility, and appropriate risk sharing between the public and private sectors are essential in large infrastructure cooperation such as high-speed railway systems, and expressed his desire to share such recognition in order to continue to advance future cooperation.

Prime Minister Abe stated that unilateral actions that change the status quo and heighten tension in the South China Sea are a common concern of the international community and expressed his hope for closer cooperation with Indonesia, voicing his expectations for the active involvement of Indonesia, which is the center of ASEAN. President Joko responded by stating that Indonesia seeks peace and stability in the region and respects the Law of the Sea.