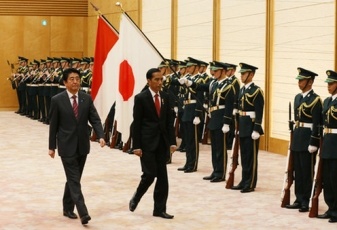 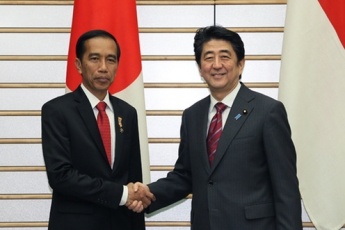 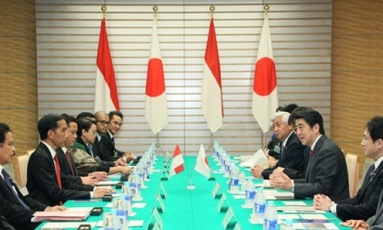 On March 23, commencing at around 6:10 p.m. for approximately 45 minutes, Prime Minister Shinzo Abe held a meeting with H. E. Mr. Joko Widodo, President of the Republic of Indonesia, during his official working visit to Japan. The overview of the meeting is as follows.

At a joint press conference following the meeting, the “Japan-Indonesia Joint Statement - Towards Further Strengthening of the Strategic Partnership Underpinned by Sea and Democracy” (PDF)

Furthermore, Prime Minister Abe said he is attaching importance to strengthening the strategic partnership with Indonesia, which is a maritime as well as a democratic nation, and wants to fundamentally strengthen the mutually beneficial relationship between the two countries and together contribute to the prosperity of the regional and international communities.

President Joko expressed appreciation for the Government of Japan’s invitation, along with stating that he wants to further deepen the two countries’ “strategic partnership” in a variety of fields, including the economy, and politics and security.

Prime Minister Abe explained that over the 70-year period since the end of World War II, Japan has consistently followed the path of a peaceful nation and contributed to the prosperity of Asia and the world, and that path will not change going forward either. Additionally, Prime Minister Abe explained that from the standpoint of proactive contribution to peace based on the principle of international cooperation, from here on also Japan will make a greater contribution to the peace and stability of the regional and international communities, and as one part of that it is currently promoting the development of seamless security legislation, and he hopes to obtain the understanding and support of President Joko. Furthermore, Prime Minister Abe said he wants to move ahead with coordinating a Joint Foreign and Defense Ministerial Consultation in order to promote security and defense cooperation, and welcomed the recent signing of the Memorandum on Cooperation and Exchanges in the field of Defense.

In response, President Joko welcomed the recent signing of the Memorandum on Cooperation and Exchanges in the field of Defense, along with stating that he hopes to hold a Joint Foreign and Defense Ministerial Consultation soon.

Prime Minister Abe stated that an open, stable sea is vital to the prosperity of the region, and once again conveyed his support for President Joko’s vision for Indonesia as a maritime nation. Prime Minister Abe also welcomed the commencement of cooperation between the two countries following his previous meeting with President Joko, and said he wants to pursue cooperation on maritime safety and industry promotion via the Maritime Forum that will be set up this time. Prime Minister Abe said he also hopes to secure understanding for the sustainable use of maritime living resources, including whales.

In response, President Joko expressed expectation over Japan’s cooperation on coastal security, and its investment in marine vessels and the processing of fisheries products, and the two leaders shared the view that the two countries’ cooperation will move ahead in the future, via the Maritime Forum.

Prime Minister Abe said that the mutually beneficial economic relationship is an important pillar of the two countries’ strategic partnership, investment from Japan reached 4.5 billion U.S. dollars in 2014 and remains brisk, and in order to further strengthen this relationship together, he wants to reach an agreement on the “PROMOSI: Japan-Indonesia Investment and Export Promotion Initiative,” an initiative of the two countries that will lead to the expansion of investment and promotion of exports. (Note: Promosi means “promotion” in Indonesian).

Prime Minister Abe also said that based on this PROMOSI Initiative, the development of the business and investment environment through the preparation of high quality infrastructure will move ahead, and core projects such as the Jakarta Mass Rapid Transit Project will be promoted, and he explained that Japan has decided to grant a yen loan of approximately 140 billion yen for three projects: the Jakarta Mass Rapid Transit North - South Line and East - West Line, and the Java-Sumatra Interconnection Transmission Line. Furthermore, Prime Minister Abe said the development of human resources for industry, including in supporting industries, will also be strengthened, and the regional development and correction of economic disparity that President Joko is addressing will also be supported. He said he wants to deepen bilateral cooperation and discussions on individual projects as well.

In response, President Joko expressed the desire to move ahead with a general review of the Japan-Indonesia EPA, and the two leaders confirmed that they will pursue the review. President Joko also said that he hopes to see Japanese investment in fields such as power generation, ports, roads, highways and the development of industrial parks within economic special zones. Both leaders shared the view that they will deepen cooperation via investment expansion and the promotion of exports, for the purpose of further strengthening the mutually beneficial economic relationship between the two countries.

Prime Minister Abe said that he hopes to further deepen cooperation in this field in the future via JENESYS 2.0 and the “WA Project.” President Joko expressed expectation over the acceptance of Indonesian youths for training in the field of agriculture.

Commenting on regional frameworks, Prime Minister Abe said that this year is a milestone year in the creation of the ASEAN Community and as the 10th anniversary of the East Asia Summit, and he wants to contribute while coordinating with Indonesia, which performs a leading role in ASEAN. Furthermore, Prime Minister Abe said North Korea’s nuclear and missile programs pose a threat, and the abductions issue is a serious violation of human rights and it will be resolved by his own administration.

In addition, the two leaders shared the view of the importance of measures to counter terrorism and radicalism. Prime Minister Abe stated that it is important to build societies that do not give rise to radicalism, and explained that the subject of moderation will be taken up at the High-Level Seminar on Peacebuilding, National Reconciliation and Democratization in Asia that will be held in Tokyo in June this year.