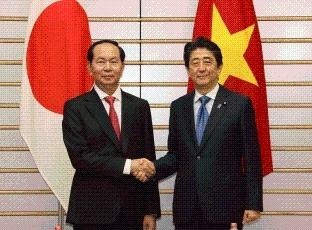 (Photograph of the leaders shaking hands) 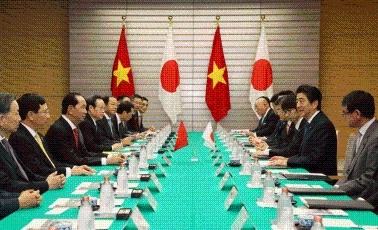 ), as well as attending a signing and exchange of cooperation documents and holding a joint press conference.

(1) Prime Minister Abe sincerely welcomed President Quang’s State Visit to Japan, stated that he is glad to meet again following the Asia-Pacific Economic Cooperation (APEC) Summit Meeting in Da Nang in November last year, mentioned that this year marks the 45th anniversary of the establishment of diplomatic relations, and explained that a large number of commemorative events are being held with great success, such as the visit to Viet Nam by Their Majesties the Emperor and Empress last year and this State Visit to Japan by President Quang. Prime Minister Abe expressed the view that this symbolizes the superb friendship between the two countries, and stated that he hopes to use this visit to Japan by President Quang as an opportunity to further develop the relationship between the two countries in all fields.

(2) President Quang expressed gratitude for the warm hospitality extended to him during this visit by the Government of Japan, Their Majesties the Emperor and Empress and the people of Japan. President Quang stated that he intends to exchange views on the way forward and fields of cooperation with the overflowing sense of friendship accompanying the 45th anniversary of the establishment of diplomatic relations, in order to open up a new stage of development in the bilateral relationship.

(1) Prime Minister Abe expressed gratitude that President Quang served as co-chair at last year’s Trans-Pacific Partnership (TPP) Summit Meeting in Da Nang, along with stating that he hopes Japan and Viet Nam will continue to cooperate in order to bring the TPP11 into effect promptly. In addition, Prime Minister Abe explained that Japan strongly supports Quality Infrastructure Development that complies with international standards, the strengthening of industrial competitiveness, and human resources development in order to realize Viet Nam’s sustainable growth, and he conveyed a plan to provide a yen loan for vocational training. Furthermore, Prime Minister Abe stated that Japan hopes to broaden cooperation that is directly connected to citizens’ life, including Vietnam Japan University, utilizing the Japanese KOSEN Technical College education model and cooperating under the “Asia Health and Well-Being Initiative,” and Japan intends to promote Japanese language teacher training, cultural and sports exchanges and people-to-people exchanges. In addition, Prime Minister Abe explained that he hopes to commence formal negotiations on a Mutual Legal Assistance Treaty and a Treaty on the Transfer of Sentenced Persons. (2) President Quang stated that Japan is a long-term and important partner to Viet Nam, and explained that he intends to strengthen political trust through active high-level visits. With regard to the defense and security fields, President Quang explained that he intends to pursue substantial cooperation in a broad range of fields, and hopes to advance cooperation based on the “Joint Vision Statement” between the two countries’ defense authorities, and hopes to request cooperation in areas such as cybersecurity, human resources development, peace-keeping operations, dioxin removal, strengthening maritime law enforcement capability and establishing a marine policy. President Quang noted that Official Development Assistance (ODA) from Japan has been contributing significantly to Viet Nam’s economic and social development, and he requested continual support through ODA, centering on the fields of large-scale infrastructure development, manufacturing and supporting industries, measures to combat climate change and agriculture. President Quang stated that Vietnam will effectively utilize ODA from Japan. President Quang is delighted that cultural exchanges and people-to-people exchanges are deepening on the occasion of the 45th anniversary of the establishment of diplomatic relations, and explained that he would like to work together to further advance the friendly relationship, including through tourism and regional exchanges. (3) Prime Minister Abe stated that on the basis of the “Free and Open Indo-Pacific Strategy,” and in light of the Japan-Mekong Summit Meeting this year, he hopes to further implement cooperation on strengthening maritime security and connectivity. President Quang replied that he welcomes initiatives that contribute to regional peace, stability and development.

(1) With regard to the North Korea issue, Prime Minister Abe expressed expectation that the U.S.-North Korea Summit Meeting will be an opportunity for progress toward the comprehensive resolution of the abductions issue and the nuclear and missile issue, and the two leaders shared the view that it is necessary to fully implement the United Nations Security Council (UNSC) resolutions. In addition, the two leaders also confirmed cooperation on promptly resolving the abductions issue. (2) With regard to the South China Sea issue, the two leaders shared recognition of importance that diplomatic initiatives will lead to non-militarization, and contribute to realize complete compliance with international law and a peaceful and stable South China Sea is important. Prime Minister Abe expressed support for Viet Nam’s diplomatic efforts. President Quang noted that Viet Nam will become the coordinating country for the Association of Southeast Asian Nations (ASEAN) with Japan from August this year, and explained that he would like to cooperate more closely with Japan. (3) The two leaders once again confirmed that they will reciprocally support their countries’ respective candidacies in the election for nonpermanent seats on the UNSC.