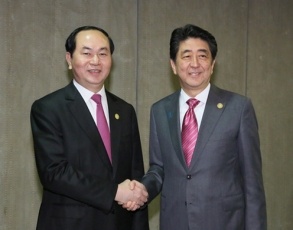 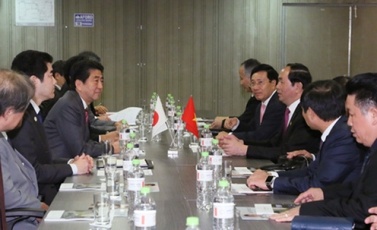 Prime Minister Abe congratulated President Quang on his appointment in April, and explained that he feels honored to be able to hold a summit meeting with the President. Prime Minister Abe stated that under the Extensive Strategic Partnership, the relationship between Japan and Viet Nam is an ideal one, and requested President Quang's cooperation on ensuring a successful visit to Viet Nam by Their Majesties the Emperor and Empress of Japan in spring next year as a symbol of that relationship. Additionally, Prime Minister Abe explained that he intends to cooperate on all fronts for the success of APEC 2017 in Vietnam.

President Quang stated that it is a great pleasure to have this opportunity to meet Prime Minister Abe, and expressed his gratitude for the Prime Minister's congratulations on his appointment. President Quang stated that Japan and Viet Nam have a very good relationship, and that he is pleased that cooperation is progressing in a broad range of fields under the Extensive Strategic Partnership. President Quang explained that Viet Nam's foreign policies have not changed following the party congress in January this year, and that Japan is a crucial partner to Viet Nam.

President Quang explained that Japan is Viet Nam's biggest partner in terms of trade, investment, and Official Development Assistance (ODA) contributions, expressed his gratitude for the great interest Japan shows in the Government and the people of Viet Nam, and stated his hope to continue to strengthen exchanges in various fields between high level officials, between regions, and between people. President Quang highly appreciated that Their Majesties the Emperor and Empress of Japan will visit Viet Nam, and expressed the view that it will be a very important event for the two countries. In addition, President Quang expressed strong hope that Prime Minister Abe will visit Viet Nam again. Furthermore, President Quang explained that Viet Nam is scheduled to hold the APEC meetings in Da Nang in November next year, and requested support for its success. President Quang also noted that bilateral trade is currently favorable and Viet Nam continues to welcome investment from Japan.

3 Cooperation in regional and international fora

With regard to the South China Sea issue, Prime Minister Abe and President Quang shared the view that peaceful resolution of disputes based on the rule of law is important, and confirmed that Japan and Viet Nam will continue to work together on this matter. Additionally, where the Trans-Pacific Partnership is concerned, the two leaders shared the position that the flow of free trade should not stop and that they will move their respective domestic procedures forward. The two sides also held a meaningful exchange of views on issues related to North Korea.