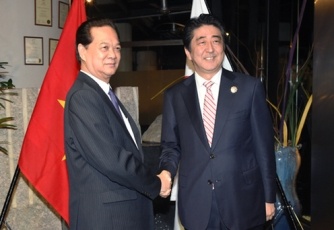 On Friday, November 20, commencing at 7:45 p.m. (local time) for approximately 75 minutes, Mr. Shinzo Abe, Prime Minister of Japan, held a Japan-Vietnam working dinner with H.E. Mr. Nguyen Tan Dung, Prime Minister of the Socialist Republic of Viet Nam, during his visit to Kuala Lumpur, Malaysia to attend the ASEAN-related Summit Meetings. The overview of the meeting is as follows.

(1) Prime Minister Abe conveyed to Prime Minister Dung the implementation of three Yen loan projects worth approximately 170 billion yen and stated that the Yen loan projects that Japan had decided to implement during the current fiscal year totaled approximately 300 billion yen. In addition, Prime Minister Abe announced the start of a preliminary study aimed at the establishment of faculties for the Japan-Viet Nam University and requested cooperation ahead of the opening of a master’s program next September.

(2) Prime Minister Dung expressed deep gratitude for the cooperation Japan extends to Viet Nam through ODA and promised that the Government of Viet Nam would use Japan’s ODA effectively. In addition, Prime Minister Dung requested the early implementation of ODA that the two countries had previously agreed on and stated that Viet Nam would welcome Japanese investment in the infrastructure field. Prime Minister Dung stated that the Vietnamese people have developed a good impression of Japan through the Vietnamese infrastructure constructed with Japan’s support. Prime Minister Dung also mentioned that he is committed to continuing cooperation regarding the Japan-Viet Nam University, including the early appointment of a university president and establishment of an administrative system.