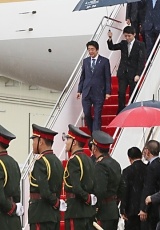 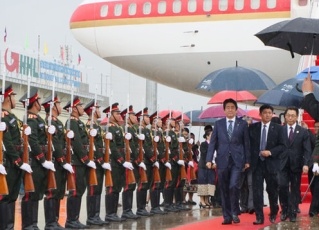 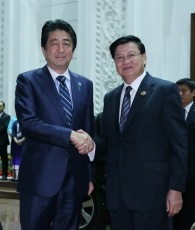 On September 6 at 7:13pm (local time), Mr. Shinzo Abe, Prime Minister of Japan, who is making an official visit to the Lao People’s Democratice Republic (Lao PDR), held a Japan-Lao PDR Summit Meeting for about 40 minutes with H.E. Dr. Thongloun Sisoulith, Prime Minister of Lao PDR. Key points are as follows. There was a welcome ceremony prior to the meeting and a joint press announcement after the meeting. 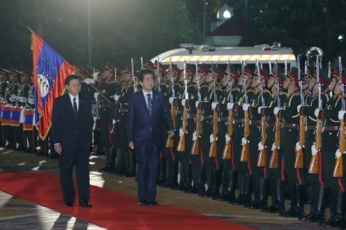 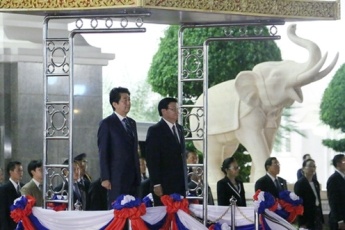 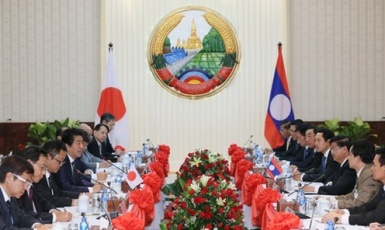 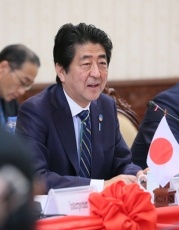 At the opening, Prime Minister Thongloun welcomed Prime Minister Abe on his official visit and commented that this second visit to Lao PDR since becoming Prime Minister is a sign of Japan’s placing emphasis on Lao PDR and that Lao PDR greatly appreciates the realization of projects he requested at the G7 Summit Outreach Meeting.

In response, Prime Minister Abe noted his happiness at having the opportunity to meet again following the G7 Summit Outreach Meeting as well as in being able to visit the beautiful country of Lao PDR again. He also expressed his great appreciation to robust efforts by Prime Minister Thongloun to strengthen fiscal discipline, prohibit illegal logging, and further other reforms since becoming Prime Minister and his hope for success in the various meetings taking place under Prime Minister Thongloun’s excellent leadership. Furthermore, Prime Minister Abe noted his pleasure at being able to today announce the Japan-Lao PDR Joint Development Cooperation Plan, which clarifies a future vision for Lao PDR and the direction of cooperation between the two countries to achieve the vision, and his hope that the plan’s specific initiatives will contribute to realization of Lao PDR’s Five-Year National Socio-Economic Development Plan.

2. Bilateral Relationship and Other Points

Prime Minister Thongloun stated that Japan’s ODA plays an important role in Lao PDR and is contributing to the country’s socio-economic development, and noted his happiness that Japan has decided to extend non-project grant aid and sent a special survey team for dispatch of fiscal experts in order to give macroeconomic assistance requested at the meeting in Nagoya and that cooperation is moving forward at a working level. He also commented that Lao PDR has received over 500 million yen in assistance for human resource training and experts and Japanese Overseas Cooperation Volunteers play an important role and that he received a courtesy call from young Japanese volunteers and offered words of encouragement to them. Additionally, he explained that direct investment from Japan is increasing and larger investments from Japan have a synergistic effect of promoting investments from other countries and that Lao PDR is making revisions to its laws to support investments.

In response, Prime Minister Abe expressed gratitude for the positive assessment of the Japanese Overseas Cooperation Volunteers and explained that Japan decided to provide 500 million yen in socio-economic development assistance and has conducted a survey by experts aimed at supporting fiscal stability following requests by Prime Minister Thongloun at their meeting in May for 1) socio-economic development assistance and 2) dispatching of experts in the fiscal area. He also stated that the Xe Katam Hydropower Project utilizing technologies from Japanese companies should contribute to advancement of Lao PDR’s power sector and that he hopes for early realization of this project. Prime Minister Abe voiced pleasure at the rise in Japanese companies making investments in Lao PDR, particularly the increase in SMEs, and mentioned his expectations for Prime Minister Thongloun to exercise leadership in developing investment environment for Japanese firms. He also stated Japan’s desire to move forward in Regional Comprehensive Economic Partnership (RCEP) negotiations and requested cooperation from Lao PDR ahead of the Japan-ASEAN Defense Ministers’ Meeting in November 2016.

The two leaders exchanged opinions regarding cooperation in regional and global matters.

In relation to issues in the South China Sea, they exchanged opinions about the importance of the rule of law and confirmed their intention to strengthen cooperation toward the peaceful settlement of conflicts. Prime Minister Abe commented regarding the North Korea problem that pressure should be reinforced through strict implementation of Security Council resolutions and other actions in response to repeated provocative actions. Furthermore, he stated that Japan remains resolved to putting its fullest efforts into early resolution of the abductions issues.

In response, Prime Minister Thongloun explained that Lao PDR is hoping for stability and demilitarization of the South China Sea and that it sees North Korea as a serious issue, and believes realization of peace is vital and disagrees with military escalation, and this perspective has been included in the statement. 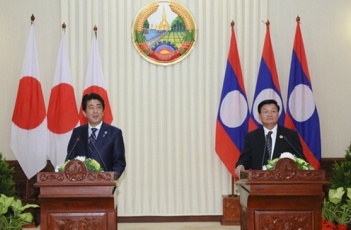 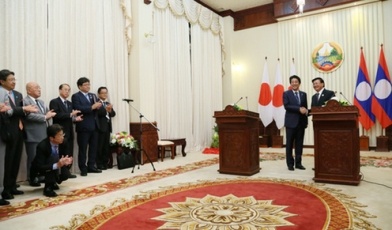