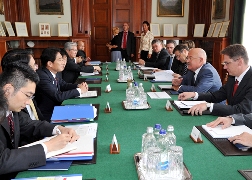 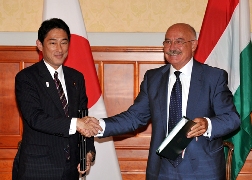 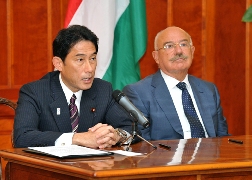 On Friday, August 23, from 10:45 A.M. to right after 12:00 P.M., Minister for Foreign Affairs Fumio Kishida, who is currently in Hungary, held talks with H.E. Dr. János Martonyi, Minister of Foreign Affairs of Hungary. After the meeting, both Ministers conducted a signing ceremony for the Japan-Hungary Agreement on Social Security, held a joint press conference, and, then, had a working lunch. The overview of the talks is as follows.

(2) The two Ministers affirmed the importance of economic cooperation in the context of bilateral relations, and from the perspective of fostering a favorable environment for business activities, the two Ministers welcomed the signing of the Agreement on Social Security. The two sides then agreed that they should pursue the entry-into-force of the Agreement at the earliest date. In the field of energy, the two Ministers exchanged views on the possibilities of cooperation making use of Japan’s high-level technologies in areas such as nuclear power and the efficient utilization of energy.

(3) Furthermore, the two Ministers shared view on the importance of interpersonal exchanges for the further development of the fully-matured relations between their countries, and they welcomed the fact that active exchanges are taking place between local governments and universities of the two countries. Furthermore, in order to promote youth exchanges, the two sides affirmed that they would cooperate together with the aim of introducing a working holiday program at an early date.

(4) As for the Japan-EU relations, the two Ministers agreed to continue to collaborate with each other in order to achieve the early conclusion of negotiations on the Japan-EU EPA and strategic partnership agreement (SPA).

(1) With respect to the "V4+Japan" Summit Meeting in June, Minister Kishida stated that Japan highly values the outcome of the Summit Meeting, including the commitment of Japan and V4 countries to work together to tackle issues confronting the international community as well as agreements on the issues such as security cooperation and support for the Eastern Partnership and Western Balkan countries.

(3) The two Ministers also agreed that Japan and Hungary, the holder of the V4 presidency, will work together for the success of the "V4+Japan" Exchange Year next year.