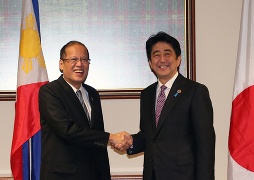 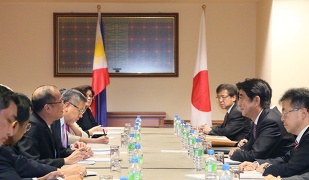 On Wednesday, October 9, commencing at around 18:50 (local time) for approximately 30 minutes, Prime Minister Shinzo Abe held a Japan-Philippines Summit Meeting with H.E. Mr. Benigno S. Aquino III, President of the Republic of the Philippines, during his visit to Brunei to attend ASEAN-related Summit Meetings. An overview of the meeting is as follows.

Prime Minister Abe expressed his gratitude for the warm hospitality he received from the Philippine side during his visit to the Philippines in July this year. He also stated that the Japanese side is preparing for President Aquino’s visit to Japan in December to make it more meaningful and that reciprocal leaders’ visits will be realized this year, the 40th Anniversary of ASEAN-Japan Friendship and Cooperation. President Aquino said that he is looking forward to visiting Japan.

Prime Minister Abe stated that he would like to further strengthen the “strategic partnership” based on the “four initiatives in diplomacy with the Philippines” (see Note) which he stated during his visit to the Philippines in July this year. Prime Minister Abe also stated that: (1) the procedures for the prompt provision of patrol vessels to the Philippine Coast Guard are underway; (2) the Government of Japan’s support for the Mindanao Peace Process will remain unchanged and Japan will extend 2 million US dollars of emergency grant aid for the internally-displaced persons (IDP) arising from the armed conflict in Zamboanga City, Mindanao Island; and (3) he is happy to welcome the progress in the discussions on enhancing bilateral currency swap arrangements. In response, President Aquino expressed his deep gratitude.

(1) The two leaders exchanged views on the South China Sea issue. Prime Minister Abe explained Japan’s basic position that disputes must be solved peacefully in accordance with relevant international laws. Prime Minister Abe stated that the ASEAN unity is important and Japan continued the further coordination between the two countries on occasions including this year’s ASEAN-related Summit Meetings.

(2) President Aquino expressed his support toward the Japan’s efforts relating to its security policy. Prime Minister Abe stated that Japan is determined to contribute even more actively to the peace and stability of the region and the world based on the principle of ‘Proactive Contribution to Peace’, and renewed his explanation on the current efforts.

(Note) The “four initiatives in diplomacy with the Philippines”
(i) The nurturing of vibrant economies together; (ii) the promotion of cooperation in maritime affairs; (iii) the strengthening of the assistance for the Mindanao Peace Process; and (iv) the promotion of people-to-people exchanges.