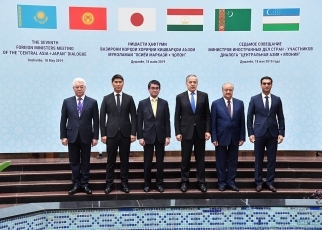 Group photo by the Ministers 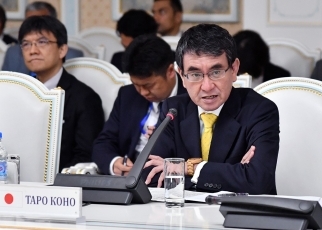 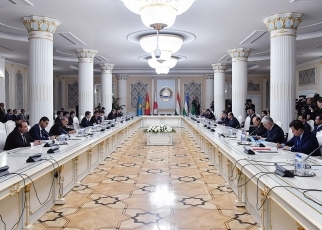 Venue of the meeting 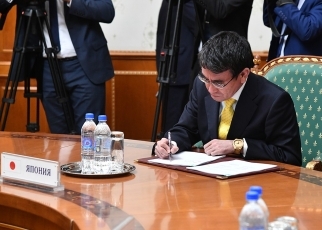 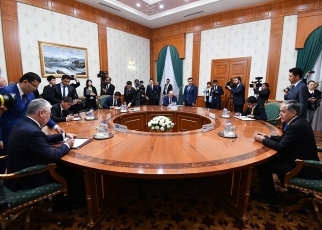 Ministers signing the Joint Statement and Action Plan
On Saturday, May 18, Mr. Taro Kono, Minister for Foreign Affairs of Japan, attended the Seventh Foreign Ministers’ Meeting of the “Central Asia plus Japan” Dialogue in Tajikistan during his visit to the country. The overview of the meeting is as follows.

Participants from member countries highly appreciated Japan’s diplomatic policy for Central Asia based on the above four pillars, including the beneficial cooperation over the past 15 years under the “Central Asia plus Japan” Dialogue.

2. On tourism, the first topic of the agenda, Minister Kono stated that Central Asia, which is blessed with the heritage of the Silk Road and great nature, has high potential for further development through promoting tourism, and that improving connectivity among Central Asian countries will be a key in order to fully capitalize the potential. Minister Kono commended the recent positive developments, including re-opening of border crossing points and flights between the countries, and called for further cooperation among the regional countries. In addition, Minister Kono proposed initiatives to promote tourism in Central Asia, including enhancing flight connectivity in the region, cooperation with Japan Association of Travel Agents (JATA), and installation of a common visa in the Central Asian region.

Referring to the region’s high tourism potential, the participating countries shared the view on the importance of regional cooperation and announced that initiatives for promoting tourism in Central Asia such as those mentioned by Minister Kono are actually being undertaken. Participants also expressed their expectation towards provision of Japan’s experiences and cooperation on human resources development.

3. Regarding trade, investment and development, the second item on the agenda, Minister Kono stated that it is important for Central Asian countries to develop a stable and foreseeable business environment in order to encourage Japanese companies to enter into their markets. Relating to this, Minister Kono requested that Tajikistan, the Kyrgyz Republic and Turkmenistan to cooperate to accelerate their respective negotiations on bilateral investment agreements with Japan. Furthermore, Minister Kono stressed the importance of infrastructure development meeting international standards, such as openness, transparency, economic efficiency, and fiscal soundness of the recipient countries, and stated Japan’s intention to assist in the improvement of the regional connectivity and infrastructure resilience using Japanese approaches, means such as through development of human resources.

Participants from member countries provided an explanation on economic reform efforts under way in their countries. They expressed their expectation towards Japanese investment and enlargement of trade with Japan, and showed gratitude for the business dialogues and other activities that have been conducted under the framework of the “Central Asia plus Japan” Dialogue. In addition, participants appreciated the importance of cooperation and Japan’s contribution towards the development of quality infrastructure to meet the international standards.

4. Regarding regional security and regional cooperation, the third item on the agenda, Minister Kono noted that the stability of Central Asia and Afghanistan is closely linked to the security of the entire international community from the perspective of global issues to combat terrorism and narcotics, and that regional cooperation is essential for addressing such issues. Minister Kono also stated that regarding the above view, the Government of Japan will continue providing support for Central Asian countries and Afghanistan, for the improvement of border control and so on. In response, member countries emphasized that regional cooperation is vital for the development of not only Afghanistan but also of the region, and expressed their commitment to engage in cooperation to counter terrorism and revitalize the economy.

H.E. Dr. Salahuddin Rabbani, Minister of Foreign Affairs of Afghanistan who participated as a guest, conveyed his deep appreciation for Japan’s long-term assistance in peace and reconstruction of Afghanistan. Minister Rabbani also expressed his determination to advance the peace process, and underlined the need for the region to work together to counter the threat of terrorism and narcotics.

In addition, participants held fruitful discussions regarding other issues of the international community and shared the view that they will work closely to address them. Minister Kono raised the issue of North Korea, including the abductions issue, and asked for the participating countries’ understanding and cooperation.

5. In the closing session, Chair Muhriddin, Minister of Foreign Affairs of Tajikistan, summarized the meeting. Minister Kono revealed that in this approximately three and a half years since Prime Minister Shinzo Abe’s visit to Central Asia in October 2015, the total amount of projects implemented or planned between Japan and Central Asia, including private-sector projects, reaches approximately 2.8 trillion yen, exchanges have deepened between 8 Japanese universities and research institutes and 16 Central Asian universities and research institutes, and 12 municipalities in Japan are preparing to welcome athletes from Central Asian countries for the Tokyo Olympic and Paralympic Games. Moreover, Minister Kono introduced that since the independence of the Central Asian countries, over 10,000 people from the countries received training in Japan and over 3,400 Japanese experts have been dispatched to the countries. Minister Kono stated, Japan will continue consistent cooperation with the region as is indicated in the Joint Statement and Action Plan which were signed at this meeting.

The participants shared the view on Japan’s becoming the next Chair for the “Central Asia plus Japan” Dialogue. Minister Kono expressed the determination of Japan, as the chair country, to make every effort to contribute on further promotion of regional cooperation. 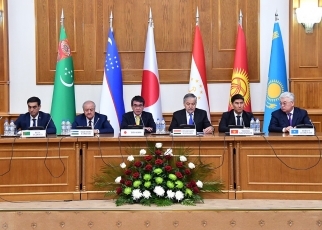 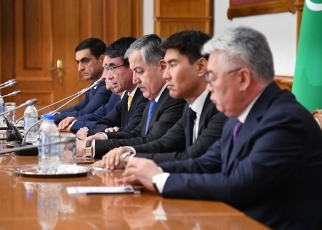 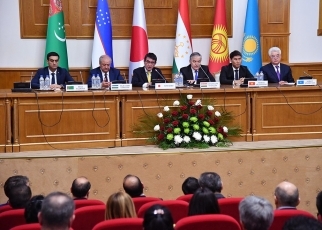