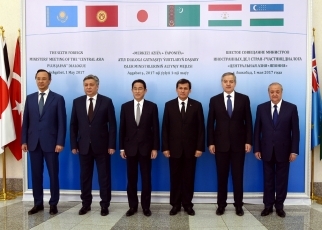 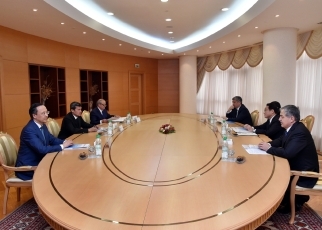 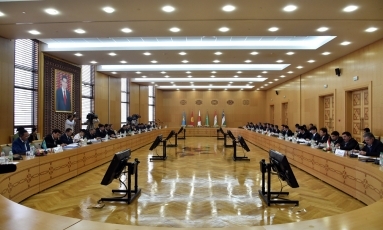 On Monday, May 1, Mr. Fumio Kishida, Minister for Foreign Affairs, attended the Sixth Foreign Ministers’ Meeting of the “Central Asia plus Japan” Dialogue in Turkmenistan. The overview of the meeting is as follows.

As a result of this foreign ministers’ meeting, the participants summarized the 25 years of cooperation between Japan and Central Asian countries, and signed a “Joint Statement” symbolizing the extensive cooperative relationship between Japan and Central Asian countries, including promoting cooperation in a wide range of fields such as countering terrorism and narcotics and other broad-ranging security arrangements, trade and investment, development, and people-to-people and cultural exchanges, the importance of resolving disputes peacefully according to international law, including the rule of law, , coordination in the field of disarmament and nonproliferation, the North Korea problem, including the abductions issue, and the importance of United Nations Security Council (UNSC) reform, including support for Japan becoming a permanent member of the UNSC as cooperation in the international arena. In particular, as a result of Minister Kishida’s encouragement, the Joint Statement mentions the North Korea problem for the first time, and firmly expresses the view that nuclear tests and ballistic missile launches cannot be tolerated, as well as firmly calling for North Korea to exercise self-restraint with nuclear tests and ballistic missile launches and fully comply with all the relevant UNSC resolutions, and for concrete actions on the denuclearization of the Korean Peninsula. In addition, the Joint Statement makes a special mention emphasizing the importance of resolving humanitarian problems, including the abductions issue. Furthermore, as an appendix to that, and as a preferential, practical field of cooperation, the participants adopted the “Roadmap for Regional Cooperation in Transport and Logistics,” which consolidates cooperation in the transport and logistics field thus far, the direction of further cooperation, and specific projects, based on the belief that strengthening mutual connectivity inside and outside the region will contribute to regional development. Minister Kishida came out with the “Initiative for Cooperation in Transport and Logistics” on the basis of which Japan will undertake concrete cooperation in this field, and based on it, he announced that Japan will provide approximately 24 billion yen of assistance.

(1) In the opening session, Mr. Rashid Meredov, Deputy Prime Minister and Minister of Foreign Affairs of Turkmenistan, the chair country, welcomed participants and stated that it is a pleasure that multilayered dialogue and cooperation in various fields is steadily progressing at the “Central Asia plus Japan” Dialogue and he hopes to deepen discussions on pressing challenges at this meeting as well.
Minister Kishida expressed his gratitude for Turkmenistan’s efforts as chair, noted that the fact that the foreign ministers of all five Central Asian countries are participating expresses the high expectations the countries place in this dialogue framework, and stated that through this Dialogue, which is evolving into a framework for promoting practical cooperation in specific fields, Japan will continue contributing to regional stability and development by deepening regional cooperation, along with expressing Japan’s intension to provide training opportunities in Japan for approximately 2,000 people over the next five years in order to continue to cooperate in the field of human resources development, which it has been placing a particular emphasis on from the standpoint of supporting each country’s nation-building and promoting regional cooperation.

(2) With regard to broad-ranging regional security arrangements, Minister Kishida expressed the view that countering terrorism and narcotics is a pressing issue in the Central Asian region, and on the basis of the discussions at the “Central Asia plus Japan” Dialogue thus far, Japan coordinated with the UN Office on Drugs and Crime (UNODC) to establish border liaison offices on drugs and crime and implemented a plan to strengthen cross border cooperation in Central Asia, and explained that Japan is proactively contributing in this field, including by recently providing the UNODC with 500,000 U.S. dollars to implement a project for strengthening national and regional frameworks for preventing and countering violent extremism in the five Central Asian countries. Furthermore, Minister Kishida stated that stability in Afghanistan is also important to the Central Asian region, and explained that Japan is implementing collaborative projects with Central Asian countries in order to support Afghanistan, as well as cooperating with Russia to hold training for drug enforcement agents of Afghanistan and Central Asia, and intends to continue these initiatives. The ministers of Central Asian countries stated that countering terrorism and narcotics and supporting Afghanistan are important challenges for them, and highly appreciated Japan’s initiatives in these fields.

(3) With regard to the topic of trade and investment, including practical cooperation such as agriculture and transport and logistics, Minister Kishida stated that it is a pleasure to bring discussions between the foreign ministers to fruition as concrete cooperation projects, including implementing the Project for Improvement of Locust Management as a measure for dealing with crop damage, which is caused by locusts and a serious problem common to the region, based on discussions on the agricultural field at the previous foreign ministers’ meeting. Minister Kishida also explained that in order to undertake concrete cooperation in the transport and logistics field, Japan have come out with a transport and logistics cooperation initiative, on the basis of which Japan provides support of approximately 24 billion yen. Minister Kishida stated that as part of this initiative, Japan will explore support such as dispatching road administration advisors and other specialists and setting up country-specific training in the transport and logistics field in line with each country’s requests. In addition, Minister Kishida explained that in the interests of promoting economic relations, the “Central Asia plus Japan” Business Dialogue was held as an initial trial in Tokyo in February this year, thus establishing an opportunity to broadly publicize business chances in this region. Minister Kishida explained that through initiatives such as these as well as the Quality Infrastructure Conference, Japan intends to contribute to business matching also. In response, the ministers of Central Asian countries commented that the Business Dialogue was meaningful and they support initiatives such as this by Japan. They also made a variety of proposals regarding future cooperative projects.

(4) With regard to sustainable development, Minister Kishida stated that the Sustainable Development Goals (SDGs) that were adopted in 2015 reflect the idea of “human security” that Japan took the initiative in advocating to the international community. Minister Kishida noted that especially as a country that has experienced numerous disasters Japan is sharing its own experiences and lessons to promote the “mainstreaming of disaster risk reduction” through the adoption of disaster risk reduction into the policies of each country. In connection with this, Minister Kishida explained that Japan is concretely promoting regional cooperation in the field of disaster reduction in the Central Asia, including by collaborating with the UN Development Programme (UNDP) to implement a plan to strengthen comprehensive risk management capacity and regional cooperation. In response, the ministers of Central Asian countries pointed out that exchanging views and sharing experience in this field is beneficial.

(6) In the closing session, Mr. Meredov, Deputy Prime Minister and Minister of Foreign Affairs and Deputy Prime Minister, expressed his gratitude for each country’s cooperation up to today’s meeting, and summarized the progress in practical cooperation through the “Central Asia plus Japan” Dialogue. Mr. Sirodjidin Aslov, Minister of Foreign Affairs of the Republic of Tajikistan, the next chair country, introduced Tajikistan’s willingness and views on future activities as the next chair.
Minister Kishida stated that it is a pleasure that the Joint Statement was signed, and noted that the importance of resolving disputes according to international law, including the rule of law, support for the concept of “Proactive Contribution to Peace” based on the principle of international cooperation and support for UNSC reform, including for Japan to become a permanent member of the UNSC are mentioned in the Joint Statement. Particularly with regard to the North Korea problems, which represent a new level of threat, in the Joint Statement it is mentioned that the countries decisively cannot tolerate nuclear tests and ballistic missile launches by North Korea and these actions are unacceptable and pose a grave threat to the peace and stability of the regional and the international community, and the countries called firmly for full compliance with the relevant UNSC resolutions, and expressed understanding regarding the abductions issue. Lastly, Minister Kishida explained that Japan intends to proactively continue pursuing cooperation in this framework and thus contributing to the stability and prosperity of Central Asia, which is important to the stability of the international community also.