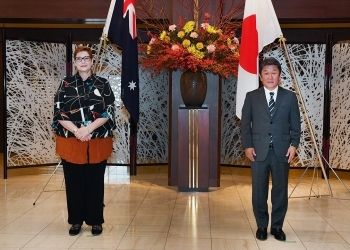 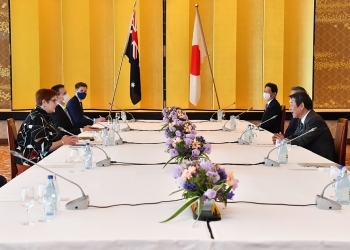 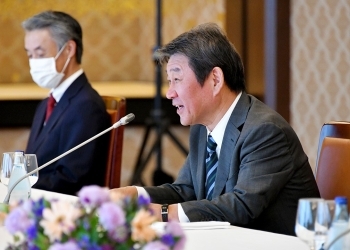 On October 7, commencing at shortly past 11a.m. for approximately 60 minutes, Mr. MOTEGI Toshimitsu, Minister for Foreign Affairs of Japan, held a Foreign Ministers’ Meeting over lunch with Senator the Hon Marise Payne, Minister for Foreign Affairs of the Commonwealth of Australia, who is visiting Japan to attend the second Japan-Australia-India-U.S. Ministerial. The overview of the meeting is as follows.

1. At the outset, Minister Motegi told Minister Payne, “I welcome your visit. As ‘Special Strategic Partners,’ Japan and Australia have great potential to further reinforce our cooperative ties.” In response, Minister Payne conveyed her congratulations upon the successful Japan-Australia-India-U.S. Foreign Ministers’ Meeting the previous day and stated that close bilateral cooperation is important for the safety and stability of Indo-Pacific region. Minister Payne also expressed her congratulations upon Minister Motegi’s birthday.

2. Following the September summit telephone talk between their Prime Ministers, the Ministers discussed cooperation in the fields of security, defense and the economy. With regard to security and defence cooperation, they affirmed the need not only to deepen their cooperation, but also to widen its scope in order to tackle contemporary new challenges. In regard to the economy, the Ministers discussed ways to resume travel between the two countries while maintaining preventive measures against the spread of COVID-19.

3. The Ministers also exchanged views on cooperation in the Pacific Islands region and in international organizations with a view toward the post-corona environment.

4. Both Ministers reaffirmed their continued efforts to realise Prime Minister Morrison’s visit to Japan at a mutually appropriate time as an opportunity to showcase their bilateral relationship.