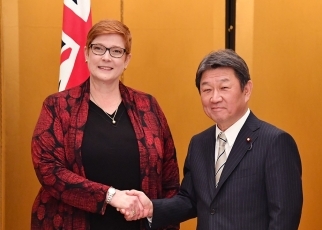 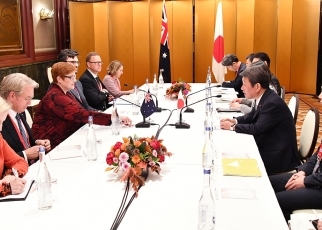 On November 22, commencing at around 4:55 p.m. for approximately 20 minutes, Mr. MOTEGI Toshimitsu, Minister for Foreign Affairs of Japan, held a Foreign Ministers’ Meeting with Senator the Hon Marise Payne, Minister for Foreign Affairs of the Commonwealth of Australia, who is visiting Japan to attend the G20 Aichi-Nagoya Foreign Ministers’ Meeting. The overview of the meeting is as follows.

1. At the outset, Minister Motegi expressed his sympathies over the large-scale wildfires in southeastern Australia. Regarding the bilateral relationship, Minister Motegi stated, “Amid the increasing severity of the security environment in the Indo-Pacific region, I intend to cooperate with Minister Payne for the stability and prosperity of the region.” In response, Minister Payne stated among other things, “It is a great pleasure for me to attend the G20 for the first time as foreign minister and also to visit Nagoya for the first time,” “Thank you for your kind message on the wildfires. I also conveyed my deep condolences to the serious damage caused by a typhoon last month in Japan,” “Although we face different types, addressing natural disasters is our common issue,” and “I would like to extend my congratulations on a great success at the recent Rugby World Cup hosted by Japan, which received enthusiasm from the great achievement by the Japanese team, although South Africa won a championship.”

2. Minister Motegi stated, “I am honored to co-chair with Minister Payne the Ministerial Meeting of the Non-Proliferation and Disarmament Initiative (NPDI),” and “I would like to express my gratitude for Australia’s cooperation as the coordinator of the NPDI.” Minister Payne showed her strong motivation in bringing out a solid outcome at this NPDI meeting which will lead to the success of the NPT Review Conference next year. Concerning the Regional Comprehensive Economic Partnership (RCEP), the Ministers confirmed the importance of concluding the negotiations by the 16 countries.

3. The Ministers discussed the Pacific Islands region, the North Korean issue, and the South China Sea issue, and shared the view that they will coordinate their actions as like-minded countries. In addition, Minister Motegi asked for Minister Payne’s understanding and cooperation for the early resolution of the abductions issue.