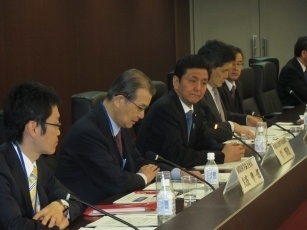 2. At the beginning, Mr. KISHI, State Minister, expressed his appreciation for the advices and recommendations submitted by the Advisory Board and the advisor Dr. KISHI for two years important diplomatic opportunities such as G7 summit and TICAD VI.

5. Regarding SDGs, the Advisory Board members discussed on the concrete actions based on current circumstances, multidisciplinary cooperation and participation of enterprises, need for new science research system which is based on the concept of SDGs and the role that Science and Technology and academia should play.
The attendees also highlighted the importance of science and technology diplomacy for drawing the midterm and long-term diplomatic strategy.