OVERVIEW: The Track 1.5 Meeting for Substantive Advancement of Nuclear Disarmament 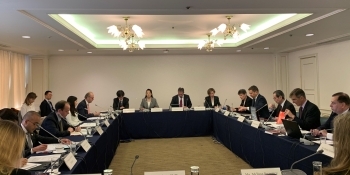 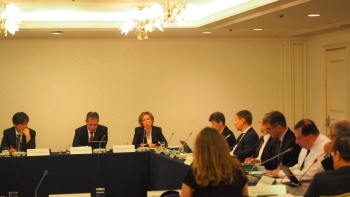 1. On March 6th, the Track 1.5 Meeting for Substantive Advancement of Nuclear Disarmament was held in Tokyo, Japan. The meeting was attended by government officials from nine countries including nuclear weapon states and non-nuclear weapon states as well as nine Japanese and foreign experts.

3. At the outset of the meeting, Parliamentary Vice-Minister for Foreign Affairs of Japan, Ms. OMI Asako made introductory remarks (English (PDF)

). Parliamentary Vice-Minister OMI stated that the Government of Japan is determined to contribute to promoting confidence-building and seeking common a ground among states in order to advance nuclear disarmament under difficult circumstances, and intends to facilitate efforts for examining concrete measures that can be taken jointly and to explore how to pursue constructive dialogue on the issues that we need to face towards the elimination of nuclear weapons.

4. During the meeting, participants shared recognition on deepening discussion regarding concrete measures including transparency and nuclear risk reduction as well as nuclear disarmament and non-proliferation education, and of building positive momentum towards a successful outcome of the 2020 NPT Review Conference, through the following discussions in the respective sessions.

(1) Concerning transparency, participants discussed transparency measures that could contribute to advancing nuclear disarmament. Participants also discussed how to facilitate explanation and information sharing on nuclear postures and policies by nuclear weapon states as well as dialogues based on national reports on the implementation of the NPT.

(2) Regarding nuclear risk reduction, participants discussed how to define risks and how to characterize risk reduction measures in the entire picture of nuclear disarmament.