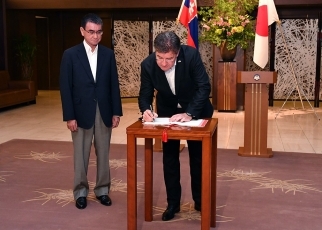 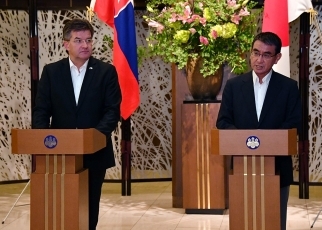 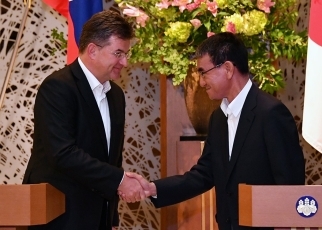 On September 2, commencing at 7:25p.m. for approximately 70 minutes, Mr. Taro Kono, Minister for Foreign Affairs, held a meeting(working dinner) with H.E. Dr. Miroslav LAJČÁK, Minister of Foreign and European Affairs of the Slovak Republic, who was visiting Japan to attend the OSCE Asian Conference as the OSCE chair. The overview of the meeting is as follows.

1. At the beginning, Minister Kono welcomed the visit of Minister Lajčák to Japan and appreciated his attendance at the OSCE Asian Conference. He stated that Japan and Slovakia will mark the 100th anniversary of Japan-Slovakia exchanges in coming 2020 and hoped to discuss the bilateral relations toward the next 100 years for further development. In response, Minister Lajčák stated that he hoped to realize exchanges at various levels in the year of the 100th anniversary.

2. The two ministers reconfirmed that the high-level dialogue between the two countries was active than ever, including the visit by Prime Minister Abe to the Slovak Republic in April, and agreed to strengthen bilateral relations through political dialogue. They also confirmed to continue and enhance "V4+ Japan" cooperation.

3. Minister Kono stated that economic relationship was fundamental for Japan-Slovakia relations. He hoped that the visit of the JETRO mission to Slovakia in October would lead to promotion of economic cooperation in wider sectors, in addition to the manufacturing industries which Japanese companies had traditionally invested for. In response, Minister Lajčák stated that investment by Japanese companies to Slovakia was the third largest among Asian countries, creating 13,000 jobs, and he expected to see more potential.

4. The two Ministers also shared the view to deepen the cooperation with the Slovak Republic, which expands its role in the international society by serving as the OSCE chair and the OECD Ministerial Council Meeting chair this year.

5. The two Ministers exchanged views on the regional situations in Europe and East Asia.