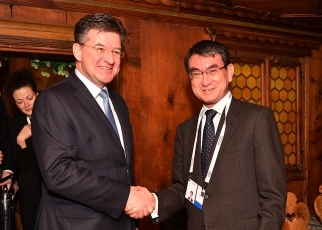 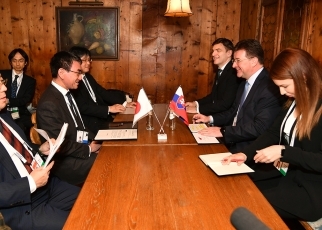 On February 16, commencing at 12:10 p.m. local time (8:10 p.m. on February 16, Japan time) for approximately 30 minutes, Mr. Taro Kono, Minister for Foreign Affairs, who was visiting Munich to attend the 55th Munich Security Conference, held a meeting with H.E. Dr. Miroslav LAJČÁK, Minister of Foreign and European Affairs of the Slovak Republic. The overview of the meeting is as follows.

2. Minister Kono mentioned the progress of the economic relations between Japan and Slovakia and expressed his expectations that bilateral relations would progress further through the Japan-EU EPA. In response, Minister Lajčák stated that he welcomed investments from Japan.

3. Furthermore, the two ministers held exchanges of views regarding cooperation through the framework of the “V4 plus Japan” (Note), cooperation in the OSCE which is chaired by Slovakia this year, and other matters.

4. Moreover, the two ministers held a wide-ranging exchange of views regarding the international situation, including the North Korean situation, cooperation toward UN Security Council reform, and other matters.

(Note) V4: A regional cooperation framework consisting of the Czech Republic, Hungary, Poland, and Slovakia. It was founded in Visegrad in Hungary in 1991. It holds dialogues at the leader, foreign minister, and senior working levels and promotes “V4 plus Japan” cooperation in a wide range of areas, such as science and technology, assistance to third countries, disaster risk reduction, and the environment. Slovakia is currently chairing the V4 for one year, beginning from July 2018.

Page Top
Back to Japan-Slovakia Relations