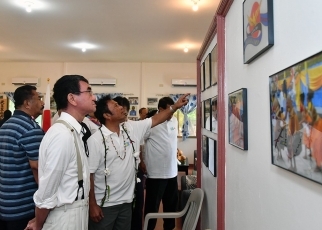 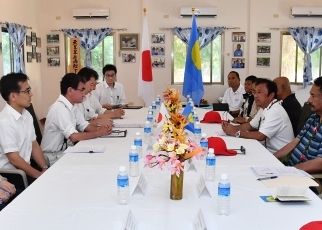 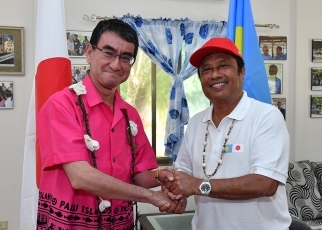 On August 6, commencing at 11:10 a.m. (local time; same time JST) for approximately 45 minutes, Mr. Taro Kono, Minister for Foreign Affairs of Japan, who is visiting Peleliu which was the fierce battlefield during World War II, paid a courtesy call on H.E. Tommy E Remengesau, Jr., President of the Republic of Palau. The overview of the meeting is as follows. (It was also attended by Minister of State Rehuher-Marugg.)

1. At the outset, Minister Kono expressed his sincere condolences on the death of President Remengesau’s father and gratitude to him for his warm welcome, including coming with him around Peleliu and being awarded the title of the honorary citizenship. Furthermore, Minister Kono stated that this is the first visit by a Japanese Foreign Minister to Palau and that he is delighted to be visiting Palau in this year that commemorates the 25th anniversary of the establishment of diplomatic relations between Japan and Palau.

3. Minister Kono also announced Japan’s initiatives for strengthening Japan-Palau relations, including cooperation in relation to Palau’s hosting of the Our Ocean Conference in 2020, as well as cooperation in maritime security, in response to which President Remengesau expressed his thanks.

4. With regard to Japan-Palau cooperation in a wide range of fields, including fisheries, collection of the war dead remains, and people-to-people exchanges, Minister Kono and President Remengesau shared the view to continue to work closely together.

5. In addition, Minister Kono and President Remengesau exchanged views on challenges the international society faces such as climate change and the issue of North Korea, and they agreed to deepen Japan-Palau cooperation.