Foreign Minister Taro Kono meets with the President of Palau 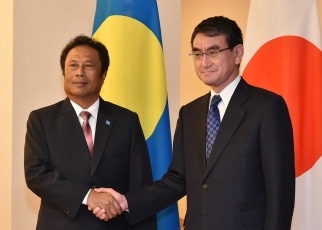 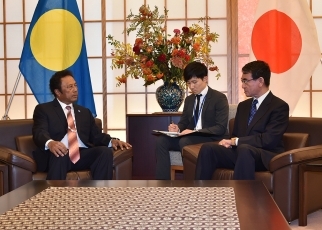 On September 15, commencing at 10:15 a.m. for approximately 20 minutes, Mr. Taro Kono, Minister for Foreign Affairs, held a meeting with H.E. Tommy E. Remengesau, Jr., President of the Republic of Palau, who is visiting Japan. The overview of the meeting is as follows.

1. At the beginning, Minister Kono welcomed President Remengesau to Japan, and President Remengesau responded by stating that North Korea poses a threat to the entire region, and he strongly supports Japan’s position. In response to this, Minister Kono expressed the view that North Korea is a threat to the international community and it is important to strictly and fully implement the United Nations Security Council (UNSC) resolutions.

2. Minister Kono expressed gratitude for Palau’s continued support for Japan in the international arena, along with exchanging views with President Remengesau on cooperation between Japan and Palau in a wide range of areas such as the fishing, whaling, the recovery of the remains of the war dead, investment vitalization and tourism.

3. Minister Kono and President Remengesau shared the view that they will cooperate toward the success of the 8th Pacific Islands Leaders Meeting (PALM8), which is scheduled to be held in May next year.

4. Minister Kono and President Remengesau confirmed the importance of increasing people-to-people exchanges between Japan and Palau.