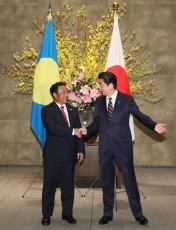 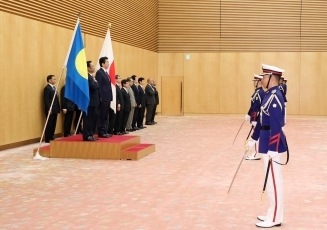 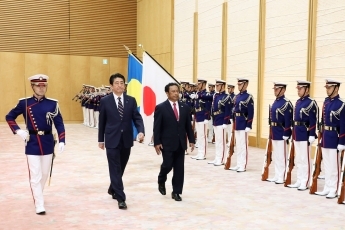 On 8th March, commencing at 6:15p.m. for approximately 35 minutes, Mr. Shinzo Abe, Prime Minister of Japan, held a meeting and hosted dinner with H.E. Mr. Tommy E. Remengesau, Jr., President of the Republic of Palau, during his official working visit to Japan. The overview is as follows.

1. Prime Minister Abe welcomed the President Remengesau’s visit to Japan, stated that he would like to further develop the relationship with Palau which is the special friend of Japan with historical bond at this occasion of 25th Year Anniversary of establishment of diplomatic relationship between Japan and Palau this year. In response, President Remengesau expressed his gratitude for the warm welcome and showed appreciation for the friendship between both countries which is continuing for even more than 25 years.

2. Both leaders discussed about the cooperation for strong and sustainable development of Palau. Prime Minister Abe stated that Japan will continue to cooperate with Palau for the realization of the“free-and-open Indo Pacific” including maritime security and connectivity through discussions with Palau. In concrete, both leaders attended the signing ceremony on grant aid regarding the provision of motorboats and floating markers as assistance towards the fields of maritime security and fishery, and Japan’s new assistance towards disaster prevention and reduction was announced. President Remengesau expressed his gratitude towards the long lasting assistance by Japan.

3. Both leaders discussed the way to further develop Japan and Palau’s strong bilateral relationship. Prime Minister Abe expressed his idea of promoting trade, investment and tourism through the economic mission to Palau and a business seminar. On the other hand, President Remengesau expressed his high hope for the promotion of economic exchanges among private sectors. In addition, both leaders confirmed to continue cooperating on the recovery of the remains of the war dead, the stable operation of the Japanese fishing vessels, and people-to-people exchanges including those of young generations.

4. Both leaders discussed regional situations such as North Korea. In addition, Prime Minister Abe requested Palau’s understanding and cooperation on the early resolution of the abduction issue to which President Remengesau showed his support.

5. Both leaders agreed to contribute to the stability and prosperity of the Pacific Island Region by strongly developing bilateral relationship hand-in-hand, taking this opportunity of President Remengesau’s visit to Japan.

6. The dinner which followed the meeting was done in a friendly atmosphere, and wide range of issues were discussed.