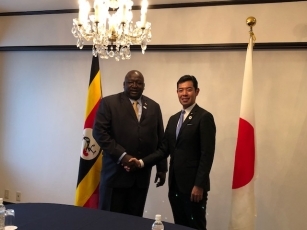 On October 6, commencing at around 5:00 p.m. for approximately 35 minutes, Mr. Kiyoto Tsuji, Parliamentary Vice-Minister for Foreign Affairs, met with the Hon. Henry Oryem Okello, Minister of State for International Affairs of the Republic of Uganda, who is visiting Japan to attend the Tokyo International Conference on African Development (TICAD) Ministerial Meeting. The overview of the meeting is as follows.

1. In opening statements, Parliamentary Vice-Minister Tsuji sincerely welcomed Minister Okello’s attendance at the TICAD Ministerial Meeting. He also welcomed that bilateral relations between Japan and Uganda have been strengthened especially in economic aspects, given the increase in recent years of Japanese companies that are operating in Uganda.

2. Parliamentary Vice-Minister Tsuji also highly valued the contribution Uganda is making to the region by accepting many refugees. He also announced Japan’s intention to provide assistance to develop irrigation facilities that will contribute to increasing production of rice and other products, and welcomed the completion of the new bridge across the River Nile, construction of which has been supported by Japan.

3. Minister Okello emphasized that the new bridge over the River Nile is extremely important for land-locked Uganda as a link to the port of Mombasa in Kenya and expressed appreciation for Japan’s assistance, including in the projects relating to irrigation, as well as promising cooperation towards TICAD 7 next year. He also expressed appreciation for the activities of the Self-Defense Force of Japan in South Sudan to date, and emphasized the importance of assistance from Japan to host communities in Uganda that have accepted more than one million refugees from South Sudan.

4. In addition, the Ministers held an exchange of views regarding cooperation in the international arena such as the North Korea situation including the abductions issue.