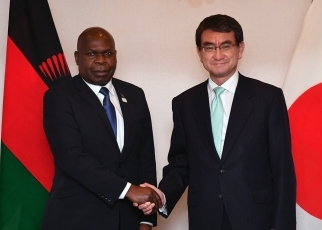 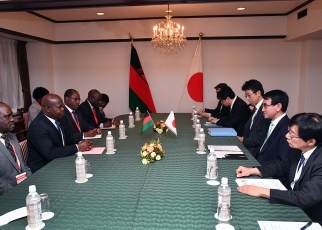 On October 7, commencing at 5:55 p.m. for approximately 20 minutes, Mr. Taro Kono, Minister for Foreign Affairs, held a Foreign Ministers’ Meeting with the Hon. Dr. Emmanuel Fabiano, Minister of Foreign Affairs and International Cooperation of the Republic of Malawi, who is visiting Japan for the Tokyo International Conference on African Development (TICAD) Ministerial Meeting. The overview of the meeting is as follows.

1. At the outset, Minister Kono wholeheartedly welcomed Minister Fabiano’s participation in the TICAD Ministerial Meeting, and expressed his respect for Malawi’s constant contributions to the stability of Southern Africa as a peace-loving nation since its independence.

2. Following this, Minister Kono referenced the dispatch of Japan Overseas Cooperation Volunteers (JOCV) with a total of about 1,800 people in relation to Malawi and the acceptance of a total of 23 trainees through the ABE Initiative, stated his expectations that the JOCV members and trainees would conduct activities that would serve as a bridge between the two countries, and stated that Japan had recently provided a grant assistance of about 360 million yen for improving Malawi’s water supply service. In response, Minister Fabiano expressed gratitude for Japan’s support for Malawi, including the dispatch of the JOCV, infrastructure support, and promised cooperation toward TICAD7 next year.

3. Also, both Ministers exchanged views on possibilities for cooperation in agricultural development.

4. In addition, the Ministers exchanged views on cooperation in the international arena, including the North Korea situation, Security Council reform, and climate change.