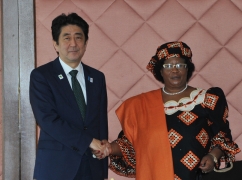 (Photo: Cabinet Public Relations Office)
On June 1, for about 20 minutes from 10:30am, Prime Minister Shinzo Abe had a summit meeting with H.E. Dr. Joyce Banda, President of the Republic of Malawi, in Yokohama, Japan. The following is the gist of the meeting. President Banda is visiting Japan to participate in the Fifth Tokyo International Conference on African Development (TICAD V) held from June 1 to 3.

1. At the beginning of the meeting, Prime Minister Abe welcomed the visit of President Banda to Japan, and expressed his expectation for development both in Africa and Japan in the wake of the TICAD V, which marks the 20th anniversary of the TICAD process. In response, President Banda expressed her appreciation for the welcome and stated that Malawi supports the TICAD process, through which Japan has demonstrated its solidarity with Malawi and Africa.

2. President Banda expressed her gratitude for Japan’s assistance in the fields of environment, education, technology, infrastructure development, agriculture, irrigation and the “One Village One Product” campaign. She introduced the projects promoted by Malawi in such areas as infrastructure development, maternal and child health and poverty eradication in villages, and also requested further support from Japan.

3. Prime Minister Abe said that he has a high expectation for the support from President Banda in order to promote the advance of Japanese companies into Malawi, a country with abundant natural resources. He also said that Japan would provide support for Malawi’s development in such areas as industrial development, education, and water supply, and expressed his intention to examine the requests shown by the President, from the perspective of supporting the development of Malawi. Prime Minister Abe also showed his respect for the promotion of the “One Village One Product” campaign in Malawi, which was originally started in Oita prefecture, Japan, and said that Japan would provide its support for the steady implementation of the campaign in Malawi. President Banda expressed her gratitude for Japan Overseas Cooperation Volunteers to contribute greatly to the capacity building in Malawi. Prime Minister Abe expressed his gratitude toward her appreciation and said that the volunteers would be proud as well.

4. In addition, both leaders exchanged views on cooperation in the international arena including the development of Africa.