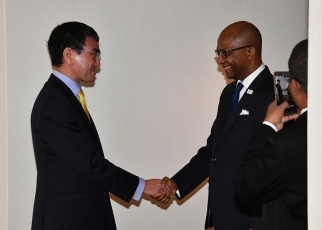 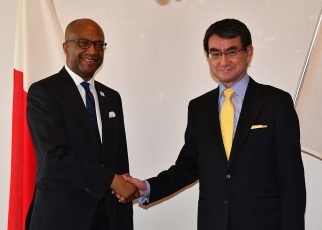 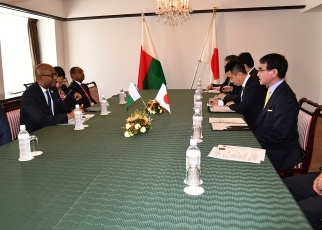 On October 6, commencing at 10:05 a.m. for approximately 20 minutes, Mr. Taro Kono, Minister for Foreign Affairs, held a Foreign Ministers’ Meeting with H.E. Mr. Eloi Alphonse Maxime Dovo, Minister of Foreign Affairs of the Republic of Madagascar, who is visiting Japan for the Tokyo International Conference on African Development (TICAD) Ministerial Meeting. The overview of the meeting is as follows.

1. At the outset, Minister Kono wholeheartedly welcomed Minister Dovo’s participation in the TICAD Ministerial Meeting. In addition, based on the Joint Statement between Japan and the Republic of Madagascar (PDF) issued at the time of the visit by H.E. Mr. Rakotoarimanana Hery Martial Rajaonarimampianina, President of Madagascar to Japan in December 2017, Minister Kono stated that he would like to further advance the partnership and work together in the international arena for common policy objectives.

2. Minister Dovo stated his expectations for increased investment from Japan, and that initiatives are being conducted toward attracting overseas investment.

3. Minister Kono indicated that Japan would provide medical care equipment in the field of mother and child health as a follow-up to President Rajaonarimampianina’s visit. In response, Minister Dovo expressed his gratitude for this as well as Japan’s support for Madagascar until now including the development around Toamasina Port, and promised cooperation toward TICAD7 next year.

4. In addition, both Ministers exchanged views on cooperation in the international arena, including the North Korea situation and Security Council reform.