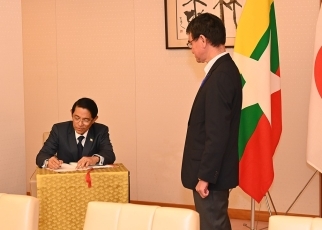 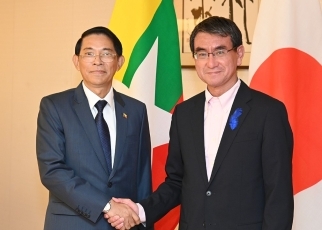 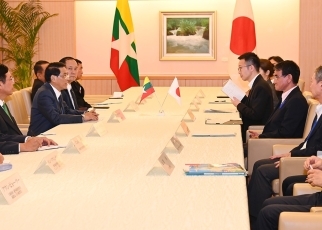 On July 9, commencing at 2:15 p.m. for approximately 20 minutes, Mr. KONO Taro, Minister for Foreign Affairs of Japan, held a meeting with H.E. Mr. Min Thu, Union Minister for the Office of the Union Government of the Republic of the Union of Myanmar, during his visit to Japan upon the invitation by the Ministry of Foreign Affairs of Japan. The overview of the meeting is as follows.

3. Regarding the peace process of Myanmar, Minister KONO welcomed the extension of the unilateral suspension of military activities by the Myanmar military, expressed his expectations for progress in the peace negotiations, and announced Japan’s continued cooperation under the leadership of Mr. Yohei Sasakawa, Special Envoy of the Government of Japan for National Reconciliation in Myanmar. Minister Min Thu responded that he will continue to discuss the peace process with Special Envoy Sasakawa.

4. Regarding the situation of Rakhine State, Minister KONO stated that it was key to demonstrate progress in a visible way on creating an environment conducive to repatriation of displaced persons. Minister KONO then urged Myanmar to ensure freedom of movement for the residents in Rakhine State, including internally displaced persons, accelerate the citizenship verification process, expand acceptance of the assistance from the United Nations and other organizations, and hold close dialogues with Bangladesh. Minister Min Thu responded that he will facilitate close coordination among the ministries and between the central and local governments for creating an environment conducive to the repatriation.

[Reference] Visit to Japan by H.E. Mr. Min Thu, Union Minister for the Office of the Union Government of Myanmar
Minister Min Thu is visiting Japan from July 8 to 13 upon the invitation by the Ministry of Foreign Affairs of Japan. The Minister will visit training institutions for Japanese local civil servants and civil servants from developing countries.