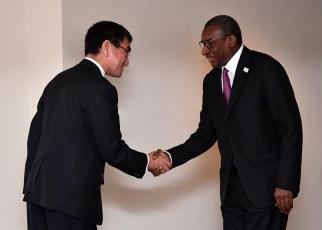 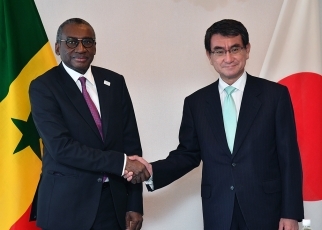 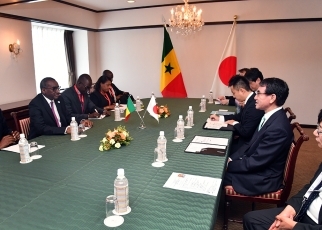 On October 7, commencing at 11:45 a.m. for approximately 15 minutes, Mr. Taro Kono, Minister for Foreign Affairs, held a Foreign Ministers’ Meeting with H.E. Mr. Sidiki Kaba, Minister for Foreign Affairs and Senegalese Abroad of the Republic of Senegal, who is visiting Japan for the Tokyo International Conference on African Development (TICAD) Ministerial Meeting. The overview of the meeting is as follows.

1. At the outset, Minister Kono wholeheartedly welcomed Minister Kaba’s participation in the TICAD Ministerial Meeting. He also welcomed that Japan and Senegal had close cooperation for two years until the end of last year as non-permanent members of the United Nations Security Council, and stated that Japan places importance on its cooperative relations with its important partner Senegal, a country that is a model for democracy in West Africa.

2. Following that, Minister Kaba stated that Senegal has made active contributions since TICAD was first held in 1993, and promised cooperation toward TICAD7 next year. In addition, he expressed gratitude for Japan’s support for Senegal in various fields such as education, health, human resource development and fishery, including support to enhance water supply capacity strengthening through the introduction of desalinization as well as to achieve the Universal Health Coverage (UHC) (PDF). In response, Minister Kono indicated that Japan would provide food support for improving food assistance in Senegal, and continue to cooperate for Senegal’s development.

3. Furthermore, Minister Kaba expressed expectations for Japanese private companies’ even more active entry into Senegal’s market. In response, Minister Kono stated that he would like to advance negotiations for a bilateral investment treaty to promote Japanese businesses in Senegal, and both Ministers confirmed that they would cooperate toward concluding the treaty.