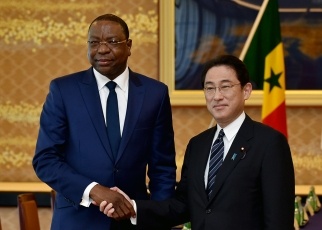 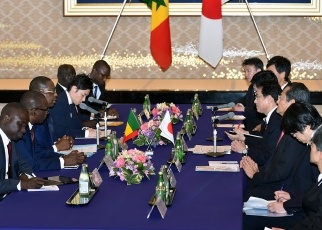 On August 5, commencing at around 12:30 p.m. for approximately one hour and thirty minutes, H.E. Mr. Fumio Kishida, Minister for Foreign Affairs, held a foreign ministers’ meeting and working lunch at Iikura Guest House with H.E. Mr. Mankeur Ndiaye, Minister for Foreign Affairs and Senegalese Abroad of the Republic of Senegal, who was making a working visit to Japan upon invitation by the Ministry of Foreign Affairs of Japan. The overview of the meeting is as follows. On this occasion, the two ministers held a signing of an exchange of notes on grant aid cooperation of 200 million yen (approximately 167 million US dollars) for the Economic and Social Development Programme.

1. Opening remarks
Minister Kishida expressed his gratitude for Minister Ndiaye’s attendance at the Open Debate of the United Nations Security Council (UNSC) on the theme of “Peacebuilding in Africa” , which was held in New York in the previous week, and stated that Japan and Senegal are partners that share many values.

Minister Ndiaye expressed his gratitude for this invitation to Japan, and stated that all African countries are grateful for Japan’s initiatives for peacebuilding in Africa.

2. TICAD VI, Japan-Senegal relations
Minister Ndiaye explained that H.E. Mr. Macky Sall, President of the Republic of Senegal, will participate in the Sixth Tokyo International Conference on African Development (TICAD VI) at the end of August, and expressed the view that TICADVI will be a good opportunity to strengthen relations between Africa and Japan.

Minister Kishida explained that Japan is strengthening the capacities of the Senegal-Japan Vocational Training Center, which is designated as a TICAD Human Resource Development Center, and is implementing cooperation through the African Business Education Initiative for Youth (ABE Initiative) and other initiatives, in order to accelerate Senegal’s growth. In addition, with regard to Universal Health Coverage (UHC), which was emphasized at the G7 Ise-Shima Summit, Minister Kishida explained that he intends to position the various initiatives in Senegal as model cases.

Minister Ndiaye expressed the view that Japan’s TICAD initiatives have set a precedent for other countries, and conveyed his respect for the fact that the upcoming TICAD will be held in Africa. Minister Ndiaye also expressed his expectation that Japanese companies will invest in Africa, including Senegal.

[Reference] The African Business Education Initiative for Youth (ABE Initiative)
A program that was announced at TICAD V in June 2013. Over a period of five years, 1,000 outstanding young people from Africa are being invited to Japan and offered opportunities to study at Japanese universities and gain internship experience at Japanese companies (PDF)