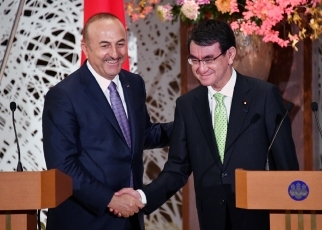 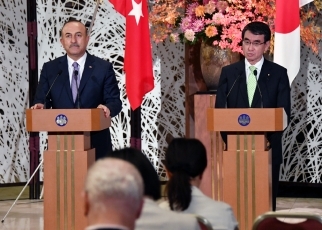 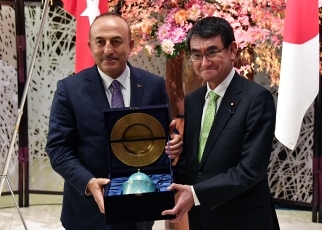 On November 5, Mr. Kono, Minister for Foreign Affairs, held a Foreign Ministers’ Meeting and working dinner with H.E. Mr. Mevlüt Çavuşoğlu, Minister of Foreign Affairs of the Republic of Turkey, who is visiting Japan, from 19:05 for approximately one hour and fourty minutes. The overview is as follows.

1. Mr. Kono, referring to the release of the Japanese journalist, expressed his gratitude to the efforts by Turkish government officials, stated Turkey is an important and strategic partner for Japan and reaffirmed to further advance bilateral cooperation in various areas such as politics, economy, culture and disaster risk reduction. Mr. Kono also expressed he would like to continue to cooperate closely with Turkey upon strengthening the involvement in the Middle East. In return, Minister Çavuşoğlu stated Japan is special for Turkey, would like to promote both friendships furthermore, welcomed Japanese involvement in the Middle East from Japanese neutral and well-balanced positon more than ever.

2. Both Ministers confirmed, in regard to bilateral relationship, that they will continue negotiations on the Japan-Turkey Economic Partnership Agreement (EPA) with the goal of reaching an early agreement and move forward their cooperation, including Agreement of Social Security, the Turkish-Japanese Science and Technology University and disaster risk reduction.

3. Both Ministers also discussed the regional situations including the Korean Peninsula and the Middle East such as Syria and confirmed to continue close cooperation with each other.