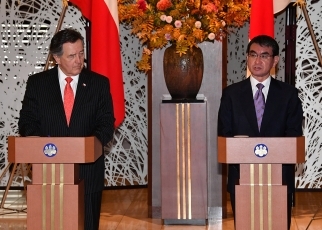 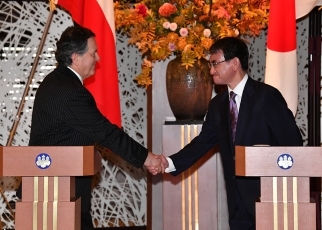 1. At the beginning, Minister Kono welcomed Minister Ampuero’s first visit to Japan and expressed appreciation for the Minister’s message of sympathy over the damages caused by the Hokkaido Eastern Iburi Earthquake. In addition, Minister Kono stated that he hoped Japan and Chile, important “strategic partners” sharing fundamental values, could further strengthen their relations in a wide range of areas. Minister Ampuero responded that Japan is an extremely important partner for Chile that shares fundamental values, such as promotion of free trade, human rights, and rule of law, and engages in common issues, and that he looked forward to deepening the bilateral cooperation.

2. The ministers shared the view that the two countries would further promote cooperation in areas such as science and technology and people-to-people exchanges, which are matters of interest shared by both sides. The ministers also shared the view that they will commence negotiations on an agreement between Japan and Chile on cooperation in science and technology.

3. The ministers shared the view that Japan and Chile would continue to work closely towards the early entry into force of the TPP11 Agreement. Furthermore, the ministers confirmed that they would exchange views regarding regional affairs, such as North Korean issues and Latin America and the Caribbean, and deepen their cooperative relations.