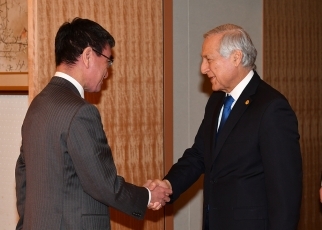 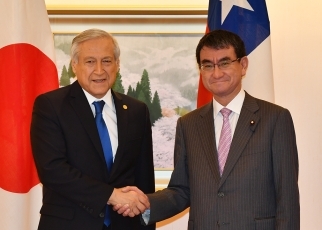 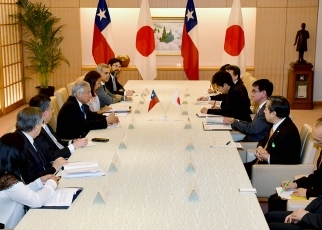 On February 23, commencing at 5:10 p.m. for approximately 25 minutes, Mr. Taro Kono, Minister for Foreign Affairs, held a foreign ministers’ meeting with H.E. Mr. Herald Muños, Minister of Foreign Affairs of the Republic of Chile, who is accompanying H.E. Ms. Michelle Bachelet Jeria, President of Chile, on her visit to Japan. The overview of the meeting is as follows.

1. Beginning
Minister Kono mentioned the favorable bilateral relationship between Japan and Chile which celebrated the 120th anniversary of the establishment of diplomatic relations last year, and welcomed that the relationship between the two countries has now been elevated to a “strategic partnership.”

2. Bilateral relations
Minister Kono expressed the view that Japan and Chile are long-standing partners that share fundamental values, and explained that he intends to continue to strengthen the relationship after the launch of Chile’s new administration in March. Minister Muños replied that he intends to promote cooperation not only in the trade and investment fields but also in the defense field and furthermore in fields such as disaster prevention and science and technology.

3. Cooperation in the international arena
Minister Kono highly appreciated the leadership that Minister Muños is displaying in hosting the TPP11 signing ceremony in Chile on March 8 this year. The two ministers shared the view that they will continue to exercise leadership in bringing the TPP11 into force promptly.

4. Regional affairs
The two ministers exchanged views on regional affairs, including the North Korea issue and the situation of Latin America. With regard to the North Korea issue, Minister Kono outlined incidents that are strongly suspected of being a “ship-to-ship transfer,” and the two ministers shared the view that they will continue to cooperate, including with regard to the full implementation of United Nations Security Council resolutions.