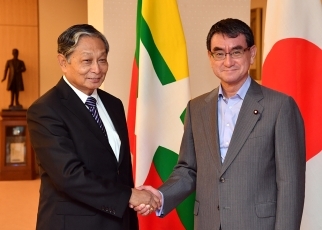 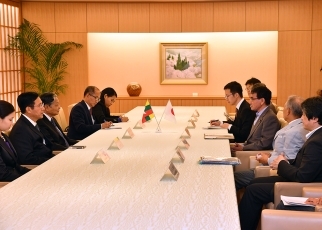 On June 11, commencing at 5:20 p.m. for approximately 30 minutes, Mr. Taro Kono, Minister for Foreign Affairs, had a meeting with Mr. Kyaw Tint Swe, Union Minister for the Office of the State Counsellor, Republic of the Union of Myanmar, during his visit to Japan. The overview of themeeting is as follows.

1. At the beginning, Minister Kono explained that Japan will continue to provide full-fledged support for democratic nation building in Myanmar. Minister Kono expressed expectation for further progress of peace process with ethnic minorities, and stated that together with Mr. Yohei Sasakawa, Special Envoy of the Government of Japan for National Reconciliation in Myanmar, Japan will continue to fully support the Myanmar government’s efforts.

2. With regard to the situation in Rakhine State, Minister Kono stated that the message encouraging Myanmar’s efforts was included in the Joint Communique of G7 Summit, that he wishes Myanmar will respond to the expectation of the international community by moving towards early repatriation of the displaced persons, and that the Government of Japan will also provide solid support.
In addition, Minister Kono highly appreciated the recent conclusion of Memorandums of Understanding (MOU) on repatriation and resettlement with the United Nations High Commissioner for Refugees (UNHCR) and the United Nations Development Programme (UNDP). He requested Myanmar to enable the UN agencies to commence their on-site activities promptly and accelerate creating environment for receiving the returnees, including construction of houses. Furthermore, Minister Kono welcomed the decision by the Government of Myanmar to establish an Independent Commission of Enquiry that will include an international personality, and urged Myanmar to work for prompt commencement of a credible and transparent investigation.

3. In response, Minister Kyaw Tint Swe expressed his gratitude to Japan’s longstanding and consistent support for progress of democratization and peace process, and stated that the Government of Myanmar places importance on the issue of Rakhine State and is making efforts for early implementation of “safe, voluntary and dignified” return of the displaced persons. He also expressed his gratitude for Japan’s efforts for releasing positive message in the G7 Summit.

4. In addition, regarding the peace process, Minister Kono stated that the Government of Japan welcomes progress in the Southeastern area of Myanmar, will continue to provide reconstruction and development assistance, expects early ceasefire agreement with Karenni National Progressive Party (KNPP), and put importance on ensuring humanitarian access in the area under ethnic armed groups’ control. In response, Minister Kyaw Tint Swe replied that the Government of Myanmar also recognizes the importance of promptly realizing ceasefire and ensuring humanitarian access in the northern part of Myanmar.