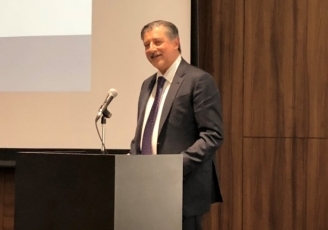 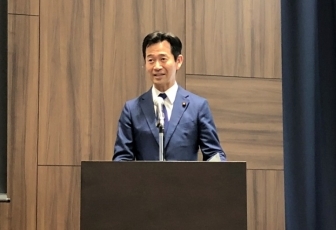 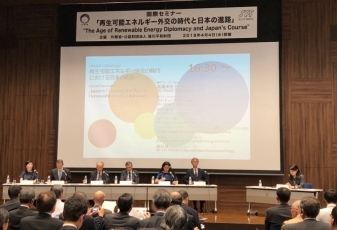 On April 4, Mr. Mitsunari Okamoto, Parliamentary Vice-Minister for Foreign Affairs, attended the International Seminar “The Age of Renewable Energy Diplomacy and Japan’s Course.” This seminar was held with the participation of Mr. Adnan Zahir Amin, Director-General of the International Renewable Energy Agency (IRENA), who was visiting Japan on a ministerial invitation. The overview of the seminar is as follows.

1. This seminar was co-hosted by the Ministry of Foreign Affairs and the Sasakawa Peace Foundation, and was attended by 230 participants including Parliamentary Vice-Minister Okamoto, Director-General Amin, government representatives, members of diplomatic corps in Tokyo, representatives from private sector, researchers, and media personnel.

) on his behalf. The main points of the message are as follows.

(1) Minister Kono is very delighted that Japan’s renewable energy diplomacy that he launched last January at the IRENA Assembly has promptly achieved tangible results through Director-General Amin’s visit to Japan. This seminar will provide a valuable opportunity for us to appreciate global dynamics through a direct communication with Director-General Amin who stays in a pivotal position in the global renewable energy landscape. Minister Kono hopes that Japan’s renewable energy diplomacy will further advance through the discussion during this seminar.

(2) Renewable energy has the highest growth potential in the global energy sector. The future of Japan’s economic growth depends on the success, or the failure, of transforming Japan’s advanced technology in related fields into the robust competitiveness in the global market.

(3) IRENA is an outstandingly important partner for Japan to undertake active renewable energy diplomacy. Japan continues its support to IRENA.

3. Director-General Amin delivered the keynote speech titled “The Age of Renewable Energy Diplomacy.” The main points of his speech are as follows.

(1) Director-General Amin visited Fukushima Prefecture on the day before the seminar (April 3) and was encouraged by seeing robust reconstruction in Fukushima. He hopes that more people all over the world will visit Fukushima and enjoy tasty local food, beautiful nature and hot spring resorts.

(2) The average costs of utility-scale solar PV and onshore wind have fallen by 73% and 23%, respectively, over the past 6 to 7 years. In 2017 alone, 167 GW of renewables capacity was added worldwide. Oil producing countries such as Saudi Arabia are taking bold steps to scale up renewable energy. The transition to a sustainable energy future is both technically feasible and economically attractive.

(3) Japan is well positioned to play a leading role in this global energy transformation. Last year, three of the four biggest renewable energy lenders in the world were Japanese. Japan is one of the top three cleantech innovation centres in the world. Last January, Director-General Amin had the pleasure of welcoming Foreign Minister Kono at IRENA Assembly where he expressed his determination to raise Japan’s renewable energy ambitions. Director-General Amin also congratulates Minister Kono on the recommendations on energy diplomacy submitted by the Advisory Panel of Experts on Climate Change. IRENA stands ready to work closely with Japan.