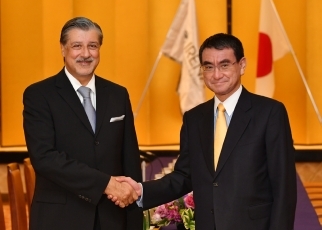 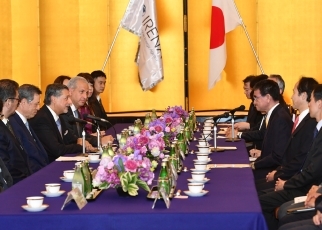 On April 3, commencing at 7:10 p.m. for approximately 1 hour and 40 minutes, Mr. Taro Kono, Minister for Foreign Affairs, received a courtesy call by Mr. Adnan Zahir Amin, Director General, International Renewable Energy Agency (IRENA), who is visiting Japan on a ministerial invitation. The call was followed by a dinner. The overview of the call and the dinner is as follows.

1. Minister Kono welcomed Director General Amin to Japan, and then mentioned that he hoped to use this visit as an opportunity to further discuss and deepen understanding of an era of renewable energy and to share with the international community how Japan is embracing this era. Furthermore, Minister Kono mentioned that Director General Amin had traveled to Fukushima Prefecture

on the same day, and expressed hope that the Director General would introduce Fukushima’s robust reconstruction as well as the region’s appetizing foods and tourist attractions by sharing his experience with his global audience.

2. In response, Director General Amin stated that he was delighted to be able to meet Minister Kono again after the Minister’s attendance at the IRENA Assembly in January this year, and he also expressed gratitude for this invitation to Japan. Following that, he highly appreciated the support that Japan has extended to IRENA thus far, and Minister Kono’s speech at the IRENA Assembly that Japan would lead global efforts toward energy transition and actions against climate change by unleashing the power of Japan’s advanced technology and innovation (PDF)

. Director General Amin mentioned that the renewable energy diplomacy advocated by Minister Kono is important and IRENA would like to work together with Japan in this regard. In addition, Director General Amin stated that he felt Japan’s future is bright through his visit to Fukushima Prefecture on the same day where he enjoyed beautiful nature, tasty local food and interaction with local people, and would recommend people all over the world to visit steadily recovering Fukushima. Director General Amin added that the global energy transition is unstoppable while Japan stands at a crossroad with high likelihood to be a front runner if its power of technology and innovation is fully unleashed, highlighting IRENA’s willingness to be an important partner along with the renewable energy diplomacy launched by Minister Kono.

3. Minister Kono and Director General Amin were also joined by members of the Advisory Panel on Climate Change, and they exchanged views on the global energy landscape including energy transition, climate change as well as cooperation between Japan and IRENA and other issues.