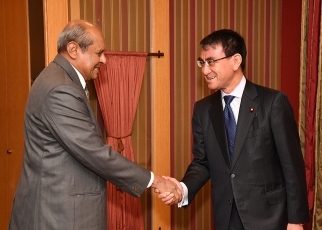 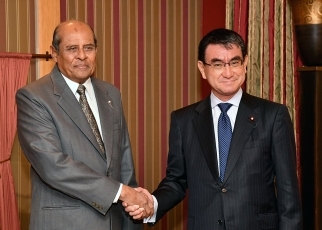 On Wednesday, March 14, commencing at 12:20 p.m. for approximately 70 minutes, Mr. Taro Kono, Minister for Foreign Affairs, held a meeting over lunch with the Hon. Tilak Marapana, Foreign Minister for the Democratic Socialist Republic of Sri Lanka. The overview is as follows.

1. Bilateral Relations
Minister Marapana expressed his appreciation for the recent visit to Sri Lanka by Minister Kono, which was the first visit by a Japanese foreign minister in 15 years, and also for the assistance extended to Sri Lanka by Japan over the years.

In response, Minister Kono stated that Japan places utmost importance on its relationship with Sri Lanka which is located in a strategic point on the Indian Ocean Sea Lanes and seeks to advance specific cooperation relating to maritime security, maritime safety and connectivity. Both ministers engaged in discussions on specific areas for cooperation.

In addition, both ministers exchanged opinions concerning cooperation in other areas, including agriculture, science and technology and education.

2. Regional Affairs
Both ministers exchanged opinions concerning the regional situation in South Asia. In addition, with regard to North Korea, both ministers noted that based on past experience, it is of vital importance to continue the maximum pressure until North Korea abandons all nuclear and ballistic missile programs in a complete, verifiable, and irreversible manner, and confirmed that Japan and Sri Lanka will strengthen their responses in this regard.