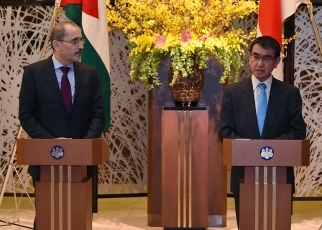 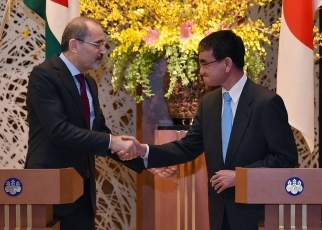 On March 9, commencing at 7:10 p.m. for approximately 75 minutes, Mr. Taro Kono, Minister for Foreign Affairs hosted a dinner meeting with H.E. Mr. Ayman Safadi, Minister of Foreign Affairs and Expatriates of the Hashemite Kingdom of Jordan. The overview of the meeting is as follows:

1. Minister Kono welcomed the visit of Mr.Safadi and expressed his respect to the fact that Jordan accepts a number of Syrian refugees and said that Japan would like to further strengthen the bilateral relations. In reply, Minister Safadi expressed his gratitude for the Japanese assistance.

2. Two Ministers exchanged views candidly on Middle East issues including the Middle East Peace Process and Syria. Minister Safadi said that there is no other option than a two-State solution and that it is important to vitalize the process to achieve the Middle East Peace and appreciate the role of Japan on the issue. In return, Mr.Kono highly appreciated Jordan’s effort for the issue of the Middle East Peace and said that Japan also supports a two-State solution and would like to coordinate with Jordan for its achievement. Both sides acknowledged that the promotion of the “Corridor for Peace and Prosperity” initiative is meaningful under the current severe situation and the efforts should be enhanced further.