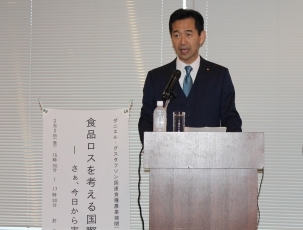 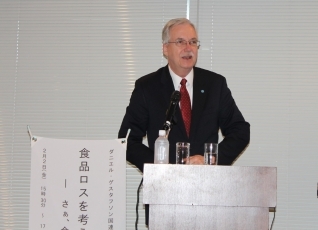 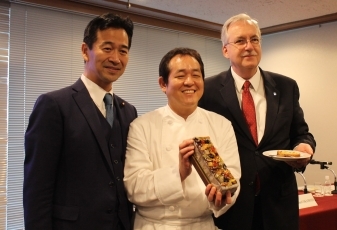 On February 2 (Friday), with the participation of Dr. Daniel Gustafson, Deputy Director-General (programmes) of the Food and Agriculture Organization of the United Nations (FAO), Mr. Mitsunari Okamoto, Parliamentary Vice-Minister for Foreign Affairs, attended ‘International Symposium on Food Loss and Waste - Let’s change it today! - ’. The overview of the seminar is as follows.

1. This seminar was held with a view to deepening an understanding on food-loss from international perspectives in cooperation with the FAO and Cooking Volunteer Group, a party of volunteers that supports the reconstruction of the disaster-stricken areas through cooking. The seminar was attended by about 50 people, and Mr. Mitsunari Okamoto, Parliamentary Vice-Minister for Foreign Affairs represented Ministry of Foreign Affairs (MOFA). Participants from relevant Ministries, international organizations, private companies and the media attended the event, amongst others.

2. At the beginning, Parliamentary Vice-Minister Okamoto delivered a speech highlighting that more than 800 million people in the world are suffering from hunger, while food waste becomes a global problem. In Japan, an equivalent of one bowlful of food per capita is discarded everyday. Parliamentary Vice-Minister Okamoto also underlined that full understanding of the preciousness of food and reduction of food waste are of paramount importance to strengthen food security for Japan and the world, and welcomed FAO Deputy Director-General Gustafson and other experts with deep knowledge on food waste for their participation in the event.

3. Deputy Director-General Gustafson then introduced that the total amount of food waste worldwide is estimated to reach 1.3 billion tons, with significant quantities of food wasted at the consumer level in developed countries while a large amount of food is lost at the production and post-harvest level in developing countries. Thus, in reducing food waste, it is important to educate consumer, raise public awareness and harness technology, he continued. By introducing exemplary activities in Japan such as the use of portable bags and food containers, so called ‘Doggy Bag’, to take away left-over food, as well as a newly developed smartphone application to encourage consumers to buy food with approaching best-before-date, hopes were presented that Japan would assume a leadership in the global efforts for food waste reduction.

4. Also, Mr. Katsuhiro Nakamura, FAO’s National Goodwill Ambassador for Japan, reported his efforts towards reducing food loss and waste as well as his extensive activities for supporting disaster-stricken areas through cooking that Mr. Nakamura has undertaken both in Japan and abroad since he was appointed as the FAO National Goodwill Ambassador.

5. Furthermore, Mr. Nakamura, FAO’s National Goodwill Ambassador, Dr. Charles Boliko, Director of the FAO Liaison Office in Japan, Dr. Tomio Kobayashi, Chairman of Doggy Bag Committee, and Ms. Ryoko Kawai, Environmental Policy Office for Food Industry, Ministry of Agriculture, Forestry and Fisheries were welcomed as panelists, with Ms. Misako Takahashi, Director of Economic Security Division, MOFA, as a moderator, to exchange views on how activities for addressing the issue of food loss can be facilitated, with a focus on the consumer level food waste including the behaviors on dining-out.

6. Participants also enjoyed fruitcakes with fruits produced in Fukushima, at a tea-break during the seminar. The recipe of this fruitcake was developed through cooperation with Cooking Volunteer Group to support the reconstruction of Fukushima.

[Reference 1] FAO
FAO (with its headquarters in Rome) is the UN specialized agency in food and agriculture established in 1945, and has a membership of 194 Member Nations (Japan joined in 1951), 2 Associate Members and 1 Member Organization (the EU). FAO aims to contribute towards global economic development and liberate the mankind from hunger, through setting international standards in agriculture, forestry and fisheries, collection and dissemination of information, data and statistics, providing international fora for discussion and technical advice and cooperation with developing countries.

[Reference 2] Cooking Volunteer Group
After Niigata Chuetsu Earthquake in October 2004, Cooking Volunteer Group was founded as a cheering party of volunteers from food industries across the sector and genre, to support the reconstruction of disaster-stricken areas. Its slogan is ‘Cheer you up by eating a delicious dish’.